The Byerley Turk or The Byerly Turk 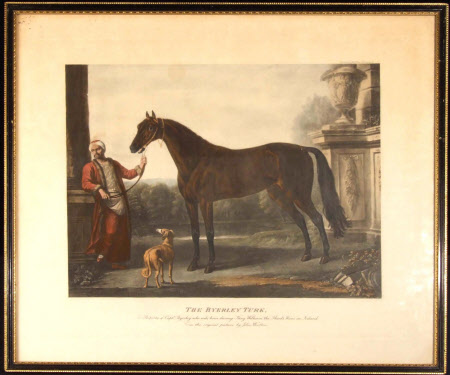 Print, engraving, The Byerley Turk or The Byerly Turk after John Wootton (Snitterfield c.1682 – London 1765). One of a set of three prints of racehorses. This horse (c.1684-1706) was the earliest of three stallions that were the founders of the modern Thoroughbred horse racing bloodstock (the other two are the Godolphin Arabian and the Darley Arabian).[1] The stallion is believed to have been captured by Captain Robert Byerley at the Battle of Buda (1686), served as Byerley's war horse when he was dispatched to Ireland in 1689 during King William's War and saw further military service in the Battle of the Boyne.