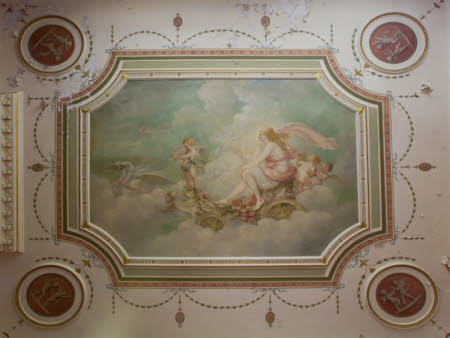 A decorative ceiling dating from the 1890s. The central panel painted on canvas surrounded by gilded and painted plasterwork.

Ceiling. Oil on canvas with painted and gilded plaster, 1890s.The ceiling is decorated with a central marouflaged canvas depicting a woman riding a chariot, which is pulled by two swans and is supported on a cloud. A putti steers the chariot with blue silk ribbon reins, whilst two putti frolic behind. The ceiling is delineated into sections by raised plain and gilded mouldings and painted green, pink, and white border with four medallions in the corners each depicting putti. The ceiling is framed by a moulded, dentil cornice with gilt detailing.