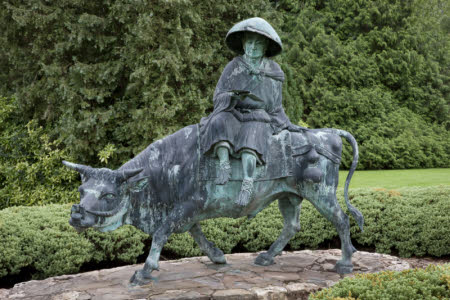 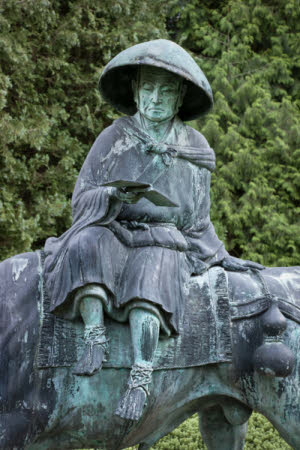 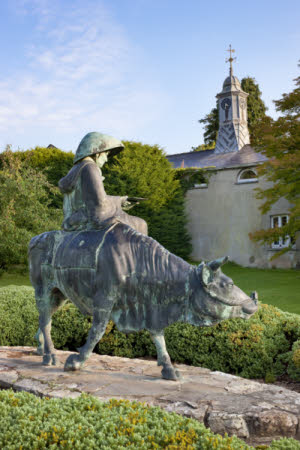 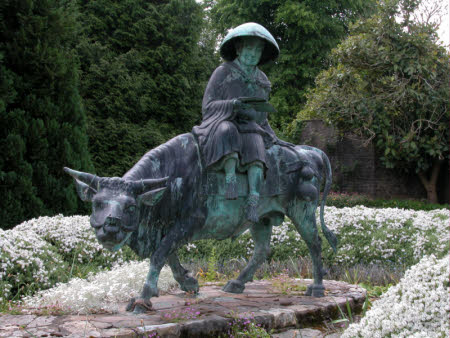 Bronze sculpture, man riding an ox while reading a book, depicting either the statesman and scholar Sugawara no Michizane (845-903) or the itinerant Buddhist priest and poet Botanka Shōhaku (1443-1527), possibly by Takamura Kōun (1852-1934). Very similar sculptures are at Lotherton Hall, Leeds (entitled 'Sho-Haku ... the Peony Priest') and in the Dabney Garden at CalTech, Pasadena (entitled 'Tenjin', the posthumous name of Sugawara no Michizane). Other famous figures depicted riding oxen in Japanese art include the Chinese peasant sage Ning Qi (seventh century BC, called Neiseki in Japanese) and Laozu, the founder of Daoism, (sixth century BC, called Rōshi in Japanese). See T. Volker, The Animal in Far Eastern Art and especially in the Art of the Japanese Netsuke, with References to Chinese Origins, Traditions, Legends and Art, Leiden, E.J. Brill, 1975, pp. 129-30.

Donated to Dyffryn Gardens in 1951 by Grenville Morgan. Previously owned by Glamorgan County Council . Makes up part of the chattels transferred to National Trust ownership as part of the lease agreement of 2012. It was agreed all moveable chattels left by the council would become the property of the National Trust.