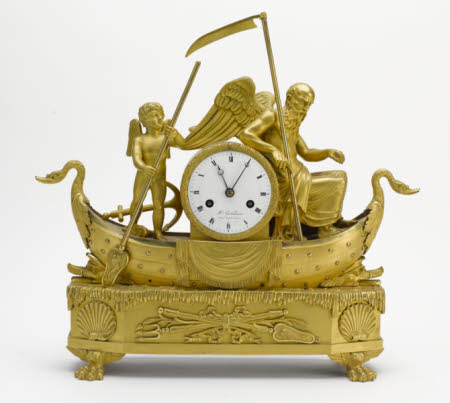 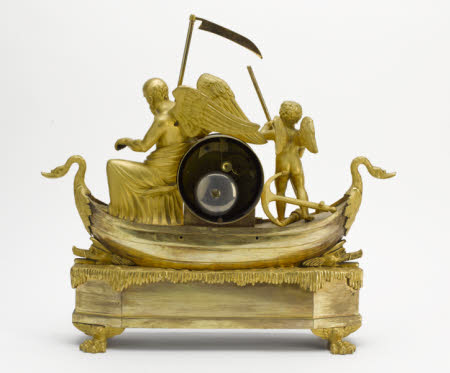 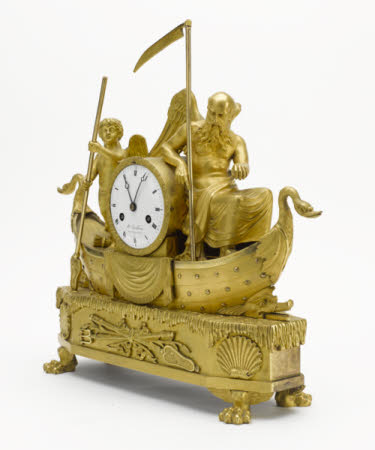 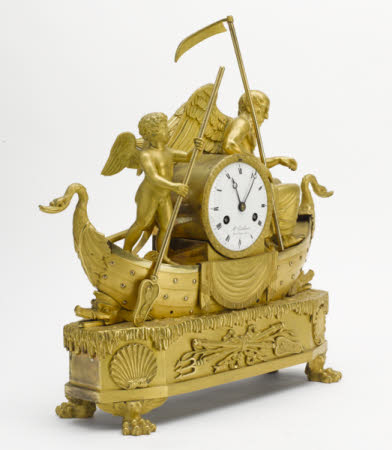 An Empire ormolu striking mantel clock the drum-shaped movement with white enamel dial pierced by two winding holes, inscribed 'Mme. Gentilhomme, Palais Royal à Paris', flanked by Father Time with sickle and a winged cherub oarsman in a classic shaped boat, the rectangular base with canted angles, applied shells and piscatorial trophies on paw feet. Update by Jonathan Betts Nov 2013. An eight-day French Empire striking mantel clock in ormolu case, signed by Mdm Gentilhomme Paris, c.1810. The two train, pendule de Paris movement with anchor escapement, and early Brocot-type adjustable spring pendulum suspension. Count-wheel half-hour striking on a bell on the backplate. The 85mm ø white enamel dial has roman hour numerals and is signed below the centre: M.me Gentilhomme / Palais Royal à Paris, and with CP in very small letters just above the VI. Winding holes at IIII and VIII and the pendulum regulation square above the XII on the dial. Blued steel demi-lune hands. The fine quality ormolu case depicts Chronos (Father Time) with sickle leaning against the clock drum and flanked by a winged cherub, (Amor) oarsman in a classic shaped boat, the rectangular base with canted angles, applied shells and a bas-relief trophy of trident and oars on the front, all standing on paw feet. The oar is in two loose pieces inserted on the clock and held in place by gravity, and the blade of the scythe also simply sits on a pin on top of the shaft. The clock drum is open at the back. There are two holes on the side of the boat below the back of the drum, original function unknown. Note: The clock would originally have stood under a blown glass dome on a gilt-wood stand. The present Brocot-type suspension and the pendulum are replacements, c.1880. The original silk suspension, was controlled with a knurled knob on a steel shaft on the backplate (now missing from backplate) and the current shaft was fitted through a new hole in the ormolu bezel above the dial. The significance of the initials CP on the dial require further investigation. Tardy lists Gentilhomme as working in Galerie de Pierre in Paris in 1810-1820.