The Congress of Vienna Table 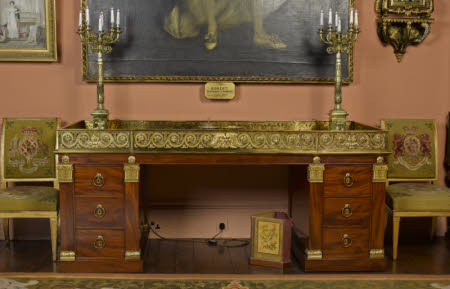 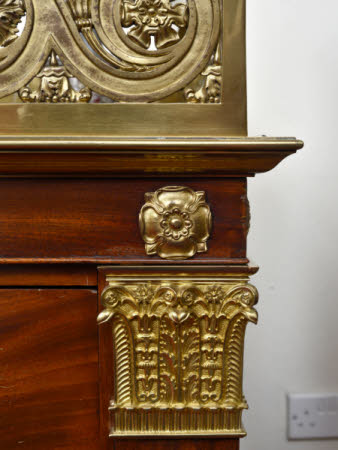 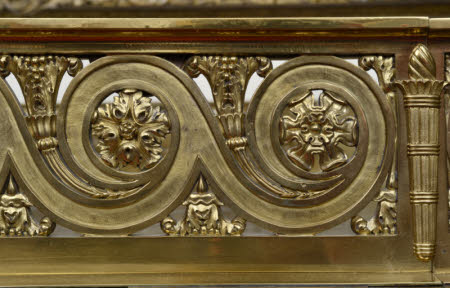 A gilt-bronze mounted mahogany pedestal desk or library table, Vienna, c.1814. The extremely weighty, intricate and highly finished gilt-bronze gallery surrounding the top of the desk is pierced with leaf scrolls enclosing varying florets in a running guilloche pattern. The centre of each side is dominated by a bearded male mask enveloped in foliage. Hinged to the table top, the central section of the front gallery drops down for use of the original green leather writing surface with a gold-tooled border. The three short drawers on both pedestals have simple ring handles surrounding the steel double-turn keyholes, and are flanked by plain pilasters surmounted by gilt-bronze Corinthian capitals, which slide upwards for removal when the table top is lifted off the supporting pedestals. The carcass is apparently of white poplar with oak drawers, and the mahogany is highly figured. The use of poplar in the carcass is foreign to English and French practices and is more typical of Italy.

Brass Plaque: 'This Table the Property of / Viscount Castlereagh / Second / Marquis of Londonderry, K.G. &c. / Was the Identical Table upon which all / the great transactions of the periods and / Years of 1814-1815 were arranged / and recorded and on which the / Treaties of Vienna & Paris / Were signed by the Plenipotentiaries of the / Congress of Vienna / Which gave Peace to Europe'