A Square in an Imaginary Dutch or Flemish Town 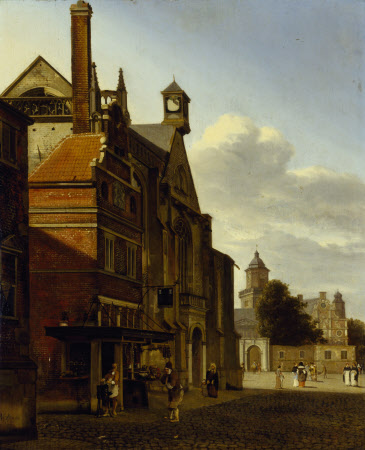 Oil painting on panel, A Square in an Imaginary Dutch or Flemish Town by Jan van der Heyden (Gorinchem 1637 – Amsterdam 1712), signed: V. Heyde (VH in monogram). This is a caprice, the tower in the left background is recognisable as Nijenrode Castle, which is at Breukelen, about seven miles outside of the city of Utrecht in Holland (a similar view of castle is in a Jan van Heyden painting in the National Gallery, London (NG 994) while the Baroque façade is the so-called 'House of Isabella' in Brussels, Belgium. The church and shop in the foreground are familiar from a similar composition now in Los Angeles, dated 1676. The presence of two Domincan friars suggests it must be a Flemish view rather than Dutch. At the corner of the street is an apothecary's shop (D. Laurier and the date 1491 inscribed on a board above the lintel, in which a druggist is mixing a potion on a stove fore; he looks towards an old man with toothache who is walking up to him; adjoining the shop is a church, with a woman and child passing the door; at the right of the picture the street leads ino a square, in which various figures are to be seen, and at the end of which is a chateau partially hidden by the trees.

Smith 1829-42 John Smith, A Catalogue Raisonné of the Works of the Most Eminent Dutch, Flemish, and French Painters, 8 vols and supplement, London, 1829-42, Vol. V, no. 126 Hofstede de Groot 1907-28 C. Hofstede de Groot, A Catalogue Raisonné of the Most Eminent Dutch Painters of the Seventeenth Century, 8 vols., London, 1907-28, Vol. VIII, no. 181 Ascott, Buckinghamshire, Scala, 2008 by John Martin Robinson and others [pictures entries by Karin Wolfe on basis of Gore entries, 1963 with contributions from Alastair Laing] , no. 68