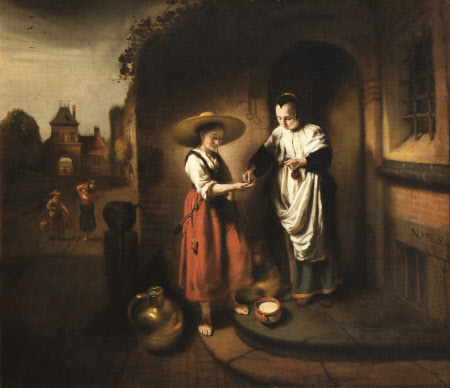 Oil painting on canvas, The Milk Girl by Nicolas Maes (Dordrecht 1634 – Amsterdam 1693), signed: N.Maes. A perspective view of a street in a Dutch town, with a gateway at the far end, and a house at the right in the foreground, at the door of which a maidservant pays a milk girl who wears an orange shirt and large straw hat; two large brass cans and a pot of milk have been put down on the doorstep; two other milk girls approach along the street at the left. A version at Apsley House shows the same street but with a different composition of figures.

Ascott, Buckinghamshire, Scala, 2008 by John Martin Robinson and others [pictures entries by Karin Wolfe on basis of Gore entries, 1963 with contributions from Alastair Laing] , no. 69 Smith 1842 John Smith, Supplement to the Catalogue Raisonné of the Works of the Most Eminent Dutch, Flemish and French Painters, London, 1842, no 12 Hofstede de Groot 1907-28 C. Hofstede de Groot, A Catalogue Raisonné of the Most Eminent Dutch Painters of the Seventeenth Century, 8 vols., London, 1907-28, VI, no. 31