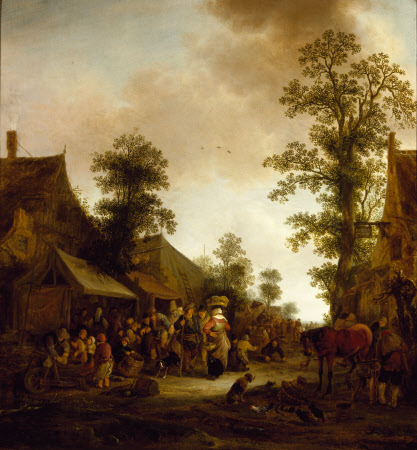 Oil painting on panel, A Village Fair by Isack van Ostade (Haarlem 1621 – Haarlem 1649), indistinctly signed and dated on wheel of wheelbarrow on right: Iac Ostade F, ?1649. A large-scale outdoor scene in a village street with a variety of peasant characters, like the woman in the centre with her back to the viewer balancing a basket on her head and with keys hanging down from her waist, unruly children gathered around the cider-maker and lovers embracing on the left and a quack addresses the crowd in the background; at the left a horse, dog and chickens.

Smith 1829-42 John Smith, A Catalogue Raisonné of the Works of the Most Eminent Dutch, Flemish, and French Painters, 8 vols and supplement, London, 1829-42, Vol. I, no. 64 Hofstede de Groot 1907-28 C. Hofstede de Groot, A Catalogue Raisonné of the Most Eminent Dutch Painters of the Seventeenth Century, 8 vols., London, 1907-28, Vol. III, no. 203 Ascott, Buckinghamshire, Scala, 2008 by John Martin Robinson and others [pictures entries by Karin Wolfe on basis of Gore entries, 1963 with contributions from Alastair Laing] , no. 23