The Interior of an Inn with Peasants playing Cards 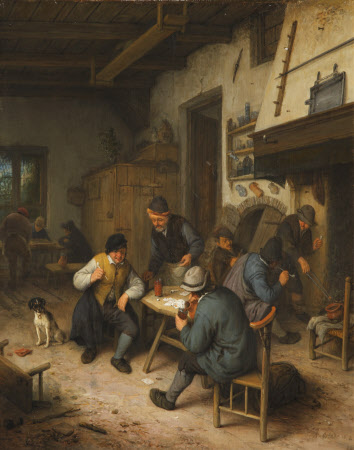 Oil painting on panel, The Interior of an Inn with Peasants playing Cards by Adriaen van Ostade (Haarlem 1610 – Haarlem 1685), signed and dated, bottom right: AV (in monogram) Ostade 167 (?) 4. Round a table in the foreground two peasants are seated playing cards while another looks on; on the left three more peasants converse before a fireplace, while in the background are three others near a window. In this interior of a shabby inn is shown the degenerate way of life and moral decay in 17th-century Holland with smoking, drinking and gambling.