Peasants carousing outside, in front of an Inn 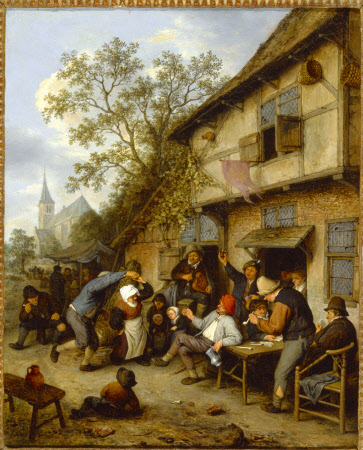 This lively and humorous scene depicts peasants enjoying their leisure in the beer-making city of Haarlem. A couple dance to the music of a hurdy-gurdy player. Many paintings of the golden age of painting in Holland have a moralising tone which is only subtly referred to here by the church in the distance. Ostade’s depiction of the group is affectionate and perhaps complicit rather than judgmental. Baron Lionel de Rothschild (1808-1879), a member the international banking dynasty collected fine works of the Dutch masters of the seventeenth century, many from the well-known collection of Willem van Loon (1794-1847).

Oil painting on canvas, Peasants carousing outside, in front of an Inn by Adriaen van Ostade (Haarlem 1610 –Haarlem 1685), signed and dated, on table bottom left: AV (in monogram) Ostade 167 [0 or 9]. A group of peasants are gathered round a cottage door; a couple are dancing to the music of a hurdy-gurdy player; at a table a man and a woman are playing cards, beside them a peasant is seated on an upturned barrel beating time to the music and holding a flagon, and another peasant stands by the table; in the doorway a man holds up his glass. The group in the foreground comprises fifteen figures. In the background is the village church, whose moral presence contrasts with the dissolute scene.