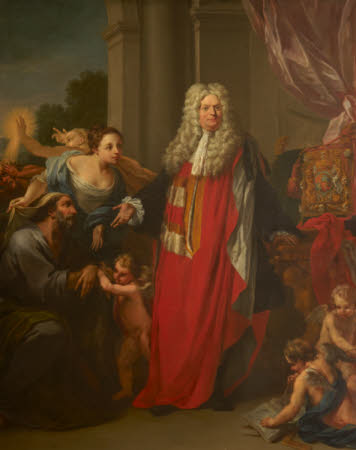 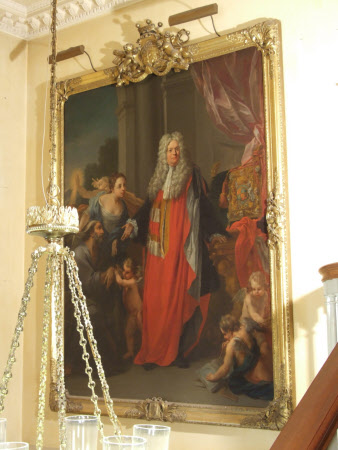 The Florentine artist Grisoni came to England in 1720 at the suggestion of his employer in Rome, the architect William Talman (1650-1719) (see conversation piece belonging to the National Portrait Gallery 5781 on loan to Beningborough Hall). The portrait was presumably made before the sitter became and Earl in 1721 and his fall from grace in 1725, although it has been suggested that the allegorical figure may be putting to flight calumny with a burst of fire and that it represents a vindication of himself after his impeachment. There is a black chalk squared drawing of the same composition with G. Gri. on the mount that was once in the collection of William Coningham (1815-1844) and now in the British Museum. Grisoni is also known to have painted the 2nd Earl of Macclesfield, signed and dated in 1727 (present whereabouts unknown). He was apparently married to an English lady but returned to Italy with the artist William Hoare in 1728.

Oil painting on canvas, Allegorical Portrait of Thomas Parker, 1st Earl of Macclesfield (1666-1732) by Pierre-Joseph (Giuseppe) Grison Grisoni (Mons 1699 – Rome 1769). 1718-1721. A full-length portrait, facing, in full-bottomed wig and Lord Chancellor's robes, his left hand resting on a table on which stands the Chancellor of Exechequer's Purse (Great Seal Bag). Beneath the table are two winged putti, representing architecture and painting and the figures of the Arts and Virtues. Grisoni, who came to England from Florence around the time that this portrait was painted, was best known for painting a ceiling (since destroyed) in the Duke of Chandos's great house at Canons. He has here introduced the whole apparatus of Italian Baroque allegory into depicting the wisdom, science and clemency of Lord Macclesfield, who was appointed Lord Chief Justice in 1716 to King George I and Lord Chancellor in 1718. This dignity is reflected in the purse at the bottom of the original frame, which, with the baron's coronet over the arms at the top, helps to date the picture to between then and 1721, when he was made an earl.