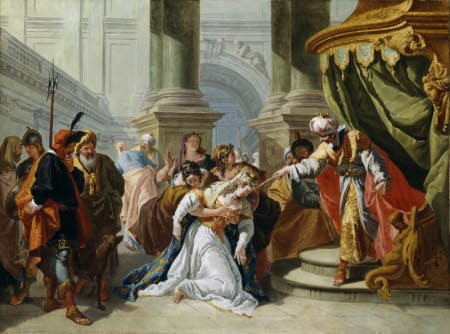 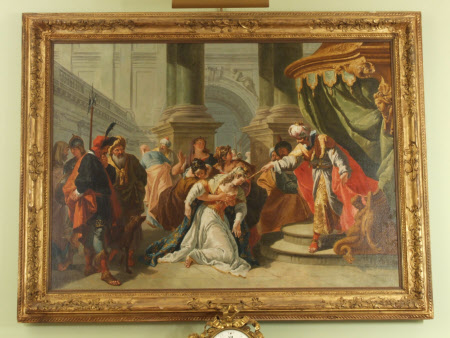 The scene shows the biblical scene from the Old Testament's eponymous book when Esther, herself a Jew, at her cousin Mordecai's bidding, intends to expose the intentions of Haman, the King's chief minister, to massacre the Jews in the Persian empire. She breaks the King's decree, that no person should come into his presence unbidden. She pleads successfully with him at a subsequent banquet. The act of saving her people is commemorated in the Jewish festival of Purim and the Christian Church regarded her as a prefiguration of the Virgin Mary. In this painting, whose blond colouring looks back to Paolo Veronese, the influence of Sebastiano Ricci, another Venetian artist with whom Fontebasso studied, and Giambattista Tiepolo, can also be seen.

Oil painting on canvas, Esther fainting before King Ahasuerus by Francesco Fontebasso (Venice 1709 - Venice 1769), circa 1750. In the crowded throne room of the Persian King Ahasuerus's palace, the central figure of his wife, Esther, dressed in elaborate eighteenth-century costume kneels, faints, in relief, at the feet of the King, who stands to the right, before a canopied throne, and touches her forehead with the golden sceptre in his right hand, indicating he would receive his own wife. Other figures stand to the left and at the back of a building with a pair of double columns before an arch.

Silbermann collection, Vienna; Pospisil collection, Venice; acquired by Ralph Dutton in 1962; bequeathed to the National Trust by Ralph Stawell Dutton, 8th and last Lord Sherborne (1898-1985) with the rest of the collections, house, gardens and estate of Hinton Ampner.