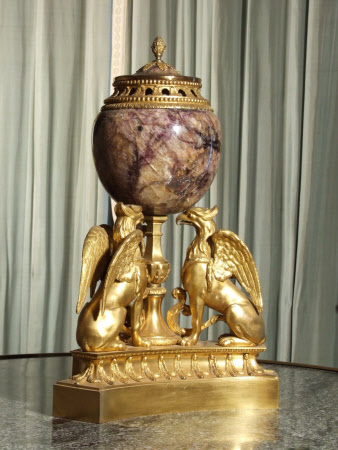 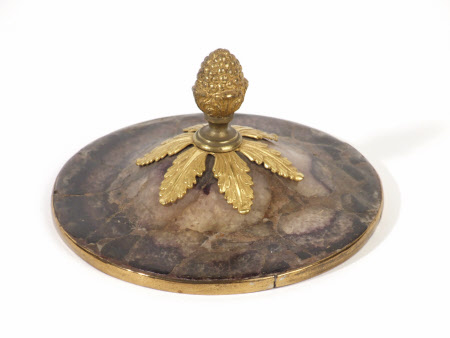 This elaborate object, for burning perfume oils or pastilles, was made by the manufacturers Matthew Boulton (1728-1809) and John Fothergill (1728-1782), after a design by Sir William Chambers (1722-96). No exact design is known for this model of perfume-burner, supported by three griffins, but it relates to ‘Griffin Vase [s]’ in Boulton's first sale at Christie's, London, in 1771.

According to his purchase book, Ralph paid the antique dealer J. W. Blanchard £160 for this vase, in December 1948, and noted that it previously belonged to Earl of Lonsdale at Lowther Castle, Cumbria. Maxine Fox (2016):The garlands that hang across each griffin's shoulders and chest are reflected in Chambers' designs for the pair of 'Kings' candle vases from the Royal Garniture executed by Matthew Boulton from 1770-71 and now at Windsor Castle (illustrated by N. Goodison, 'William Chambers's Furniture', Furniture History, 1990, vol. XXVI, p. 67-89). On the Hinton Ampner perfume burner there is evidence of filled holes in the body and on the top of the griffin’s head which would have supported candlebranches and it is possible that the branches were similar in style to those on the ‘Persian vase’ illustrated by Goodison op. cit., 2002, plate 351, p. 348. It is worthwhile noting that the pierced neck with beading, the finial and the ovoid body, together with the hexagonal column supporting it and the decoration of the upper surface of the triform plinth are very similar to those on this perfume burner. A pair of these ‘Persian vases’ were purchased by Sir Lawrence Dundas, and are now in the Victoria and Albert Museum, London (fig. 13). Furthermore, the columnar stem reflects a drawing by Chambers in his ‘Franco-Italian’ sketchbook (see V & A Museum Department of Prints and Drawings, 5712). Seven of the eight perfume-burners sold at prices of between £11 0s.6d. and £15 4s. 6d. with Lady Godolphin and Colonel William amongst the buyers. The eighth unsold vase was probably that recorded to have been sent to Amsterdam by William Matthews, Boulton's London banker. Several examples of this model are recorded including: -one belonging to Sir John Griffin Griffin purchased for £10 20s 0d in December 1771. -a ‘small’ one in the Christie’s sale in 1772. -a pair of griffin vases with stone bodies listed among the stock in 1782 as a ‘griffin or moulu essence vase, white marble, and three round stone plinths for griffin vases’ -a larger version raised on an inward curved tripartite base, circa 1770-71, illustrated by J. Harris and M. Snodin, Sir William Chambers: Architect to George III, New Haven, 1996, p.162, fig. 242. -a further closely related pair was sold from the collection of John Villiers, Esq., Christie's, London, 16th November 1995, lot 3.