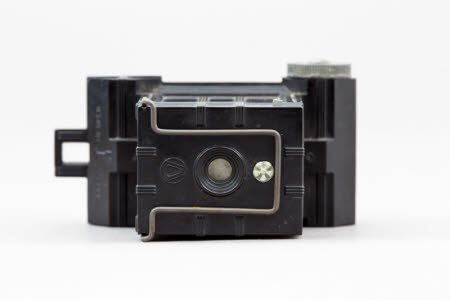 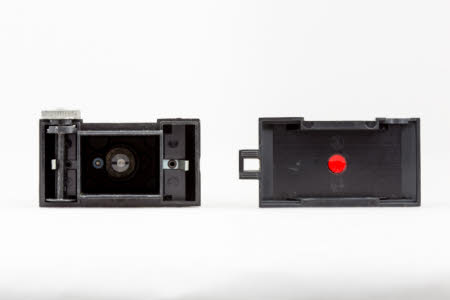 Univex Model A miniature camera by Universal Camera Corp. New York, USA. Black moulded plastic body. Glass meniscus lens and single speed metal shutter. Uses number 00 rollfilm with 6 exposures. Wire frame sportsfinder hinges up from front. Rear sight is moulded onto body. Markings: Moulded within the plastic body: on rear - " Univex. Use Univex No.00 film rolls only. Model A camera." Patent details. "Universal Camera Corporation, New York, NY, USA" and around rear red window: "Made in United States of America". Universal logo above lens. Beneath moulded sight is "Press to open" and an arrow. This is the 1934 model as it has a geometric design around the shutter (rather than the sunburst design of 1933) and is the most common variant. The lens opening is stepped, to reduce stray light reflections and the wind knob is made of die-cast zinc. Original cost was only $0.39, and it used Universal's no.00 roll film at $0.10 per roll - leading it to sell over three million in three years.

Part of the Fenton Collection. A gift from British Film Institute in 2017. From 1986-1999, part of BFI collection for the Museum of the Moving Image. BFI purchased collection in 1986 from James Fenton's Museum of Photography, Port Erin, Isle of Man 1976-1986