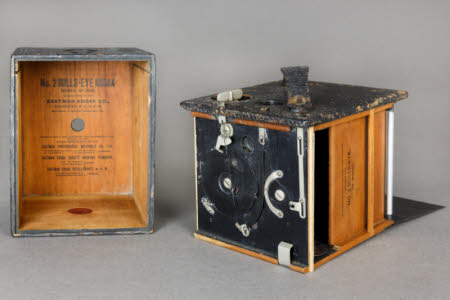 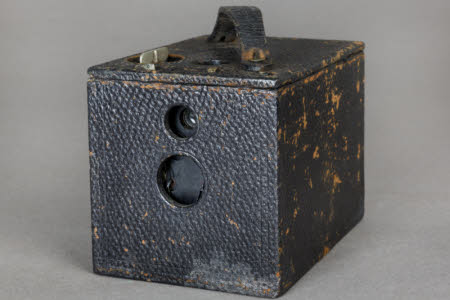 A Kodak No.2 1898 model Bulls Eye box roll film camera. The main body is wood with a black leatherette covering and a leather handle. Metal and wood film holder. Meniscus lens, rotary shutter. There is a tripod bush. Markings: Serial Number embossed on outside: 117871 Printed on inside of camera: "No.2 Bulls-Eye Kodak Model of 1898, manufactured by the Eastman Kodak Co, Rochester, NY, USA, successors to Boston Camera Mfg Co." Patent information and addresses for Eastman Kodak in London, Paris and Berlin. Other markings inside camera: "In ordering supplies for this camera, specify for No.2 Bulls-eye '98 Model." "Start the paper under this cross-piece". Printed on a black card flap: "Fold this mask over outside of black paper, after it is threaded up."