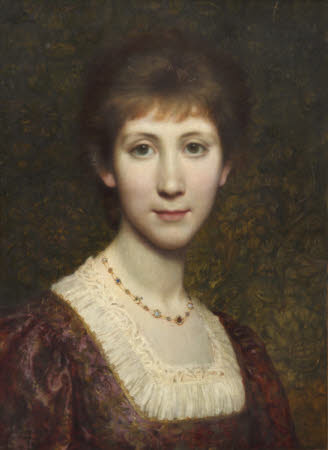 This portrait of 19-year-old Elsie Thomson, who later married Kenneth Grahame of ‘The Wind in the Willows’ (1908) fame, is exquisitely executed. She has delicate features, a lovely benign expression and the detail of her dress and necklace are fine. It is signed and dated 1881, the year Dicksee was made an Associate of the Royal Academy. She, with her sister, Winifred, and their brother, Courtauld, gave their home Dorneywood to the National Trust in 1943 for exclusive use of the Chancellor of the Exchequer. The picture is said to have been given by Dorothy Trevor Daintree, a medical graduate and the 'gracious and energetic English lady' who worked at Tripura missionary hospital in 1945. But the connection between her and the more senior Elsie remains a mystery.

Oil painting on canvas, Miss Elsie (Elspeth) Thomson, later Mrs Kenneth Grahame (1862-1946) by Sir Francis Bernard (Frank) Dicksee, KCVO, RA (London 1853 – London 1928), signed and dated upper left in red paint (obscured by frame): FRANK DICKSEE 1881. A head-and-shoulders portrait of the future wife of Kenneth Grahame, author of 'The Wind in the Willows' (1908) whom she marrried in 1899. Their son Alastair, who was nicknamed 'Mouse' and had only one eye, was the inspiration for Toad but committed suicide at 19. She was the daughter of Robert William Thomson (1822 -1873), the inventor of the pneumatic tyre and the first floating dock, and his wife, Clara Hertz. She was a favourite of Sir John Tenniel, who wrote her annual valentines, and a friend of Alfred, Lord Tennyson. She was also the step-daughter of John Fletcher Moulton, barrister and sometime Liberal MP. This was one of the first portraits exhibited by Dicksee at the Grosvenor Galleries in 1882. A photograph of the picture taken soon after its exhibition shows that it is signed and dated which is only just visible now; the picture was unframed by National Trust's painting conservator, Tina Sitwell, in April 2013 and its presence confirmed. The sitter and her sister donated Dorneywood to the National Trust in 1943 with their brother Lord Courtauld-Thomson of Dorneywood as part of the Dorneywood Settlement. It seems that the picture was at Dorneywood as late as 1959 when a book on Grahame was written and the painting was illustrated. This information comes courtesy of Simon Toll.

This portrait was once thought to be a portrait of Dorothy Trevor Daintree (1888 – 1965) who purportedly gave the picture to the Trust and, based on stylistic evidence, it was attributed to William Blake Richmond (1842 – 1921). But the Frank Dicksee expert, Simon Toll, got in touch with the Trust in 2013 and told us of the existence of the signature of this Victorian artist and its date on the picture, based on original photographic sources when the painting was exhibited at the Grosvenor Galleries in 1882. This had been obscured by the current frame but on closer examination, in red paint on the top left hand corner, it is signed and dated 1881, the year Dicksee was made an Associate of the Royal Academy and of which he was later to become President. Furthermore the portrait was identified as being of Elsie Thomson (1862-1946), who later married Kenneth Grahame of ‘The Wind in the Willows’ (1908) fame in 1899. It makes sense that the Trust should have this painting as the sitter; her sister, Winifred; and their brother, Courtauld, gave their home Dorneywood to the National Trust in 1943 for use by the Chancellor of the Exchequer (just as Chequers was given by Viscount Lee for use of the Prime Minister). It was apparently seen hanging there in 1959.

Verso: Label on back Alastair Laing: All my efforts to find out where this portrait came from - and thus, perhaps, the sitter's identity, have proved fruitless. I have, however, shown a photograph of it to a Victorian expert, Christopher Newall, who thought that it might be by Sir William Blake Richmond (1842 - 1921) -named from his father's late friendship with Blake), and this has been conformed by the author of the work in progress on the artist, Simon Reynolds Verso: Stamp: Prepared by Windsor and Newton, 38 Rathbone Place, London Verso: Label in green stamp: 10774 Verso: Pencil on canvas: 266 Recto: Inv. no bottom left: [3?]58