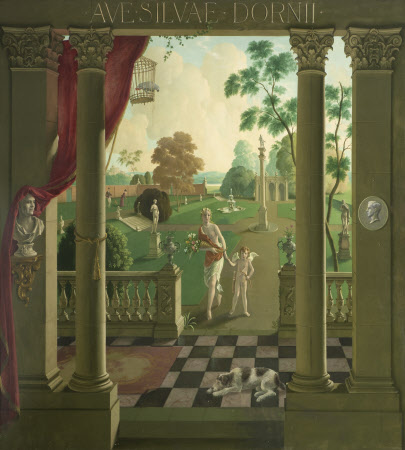 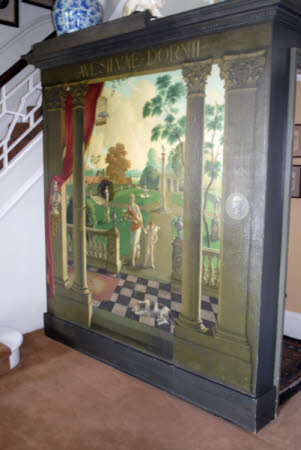 The refined Edwardian couple playing a demure game of croquet at the far left of the scene is perhaps the only truthful aspect of Rex Whistler’s decorative panel painted for Sir Courtauld Thomson (1865-1954) to separate the front door and the hall of his house at Dorneywood. The full panel depicts an allegorical scene of the goddess Flora holding the hand of a frightened little Cupid, coming into the house from the garden. Although the garden is an imagined one, the walled croquet lawn is indeed part of Dorneywood Gardens and is still in use today. Indeed, it was in 2006 when a less discreet game of croquet at Dorneywood captured the public imagination. John Prescott, then Deputy Prime Minister – having been left in charge of the government while Tony Blair was out of the country – was photographed playing croquet on the very same manicured lawns in Whistler’s panel.

Oil painting mixed with wax and turpentine on canvas laid down on panel, 'Ave Silvae Dornii' by Rex (Reginald) John Whistler (Eltham 1905 - Normandy 1944). Mural inscribed with the initials CT [Courtauld Thomson], and signed and dated 1928. The title and inscription on the painted entablature of the classical arch means 'Hail the woods of Dorney!' as a pun on the place. The painting is in the porch of the house.The goddess Flora is about to enter the house accompanied by Cupid (Eros) who seems to be frightened by the family pet dog, Spot, sound asleep on the threshold.