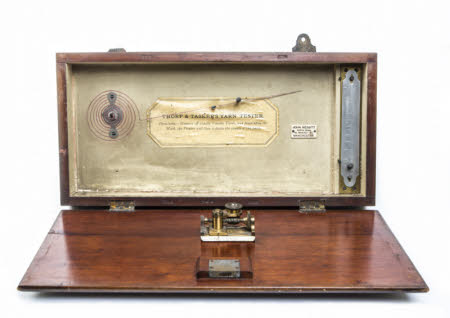 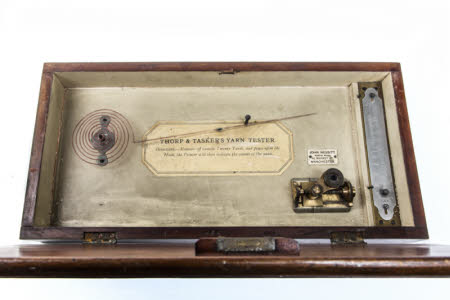 A Thorp and Tasker's spiral yarn tester made by John Nesbitt, Manchester. This instrument was an alternative to the yarn and cloth quadrant. It consisted of a glass coil spring, to which a hook and pointer were attached. A length of yarn was removed from the cloth and when suspended from the hook, drew the pointer down over a scale to a position denoting the required count. Prior to undertaking this test, the user had to ensure the pointer rested on zero. The scale was adjustable, and could be moved up or down as required. The operator also had to be wary of air movement such as breathing, which could impact the test result. Regardless of which method was used, allowances had to be made for the presence of filling or colouring in the fabric. The usual trade practice was to minus from the count of the yarn in the finished cloth a set percentage in order to account for this. John Nesbitt was located at 42 Market Street, Manchester. The workshop manufactured instruments for the textile industry such as weighting scales, yarn balances, wrap reels. In 1913, John Nesbitt took over scale makers H. Sutcliffe & Co, which was also located in Manchester.