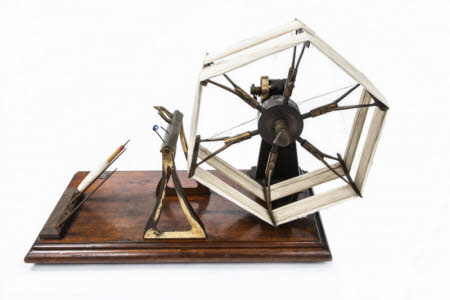 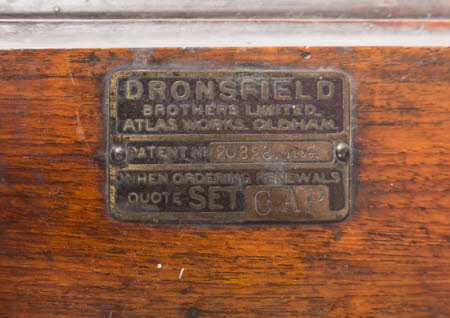 Wrap wheel made by Dronsfield Brothers of Atlas Works. A brass wheel sits on a wooden base and a wooden handle turns the wheel drawing the yarn from four tubes. Wrap wheels were part of the standard equipment expected of testing rooms during the late-nineteenth century. The wrap wheel drew yarn out of cops or bobbins evenly without overlapping and was used to prepare yarn for tests such as weighing, determination of count and strength. Bobbins were placed on the yarn cone stand and the yarn was passed through a tensioning device while a mechanical counter showed rotations. As the yarn wrapped around the wheel it was evenly spaced, allowing for easy examination of quality, length and weight. Some wrap wheels contained measuring devices such as quadrant scales to check the weight and length of yarns without having to use additional apparatus. Dronsfield Brothers of Atlas Works, Oldham were a firm of machine makers founded in 1860. In May 1915, James Dronsfield filed an application for patent on his ‘detachable jacks’ for rotating shafts, of which the pictured is a specification. It was patented in August 1916.