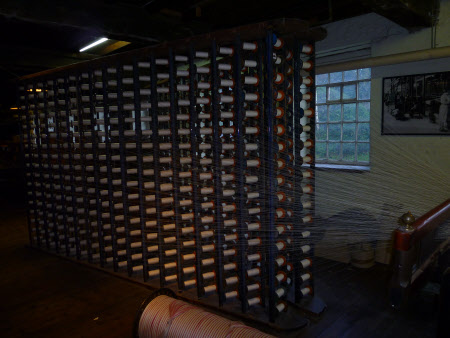 A creel or wooden warping frame in two parts on which bobbins are mounted and aligned so as to form a 'v'. The frame is from R. Greg and Co. Reddish.

The wooden frame was originally used at R. Greg and Co in Reddish.

V-shaped wooden frame in two parts, the two parts are aligned so as to form the 'V'. Each part of the V is a rectangular wooden frame with 17 pairs of vertical rails. These rails have 17 horizontal bars on which a bobbin is mounted. The yarn on these bobbins is drawn onto the beam by the beamer. Each of the vertical rails has a glass bar along the length of its outside edge to stop the yarn snagging on the wood as it passes over it en-route to the beamer.