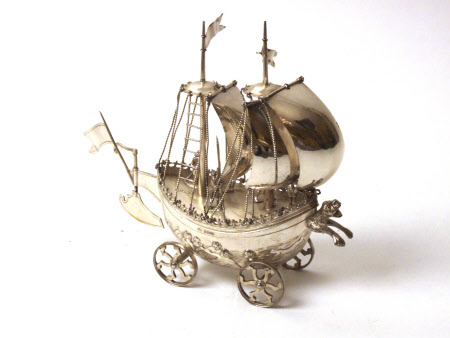 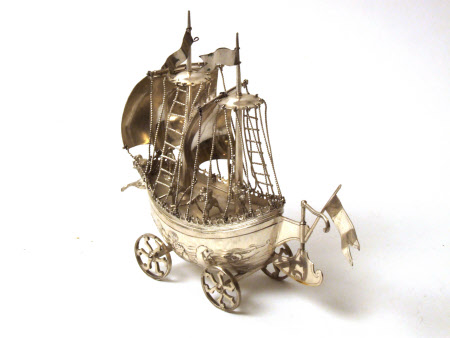 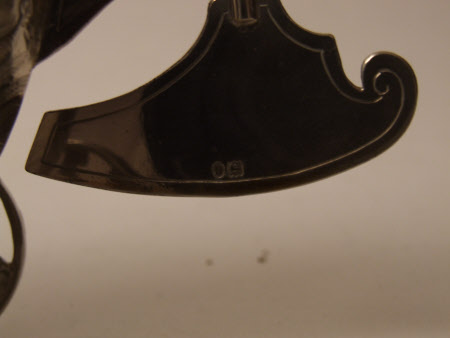 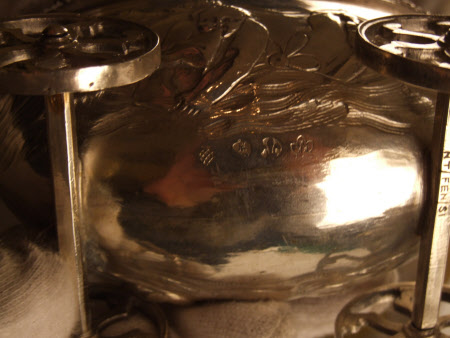 The nef was once an important part of elegant continental dining, holding cutlery, napkins, spices, and even wine in its hollow hull. It was once illegal to own a nef unless one was Royalty.

Dutch silver two-masted nef on four wheels, with five figures on the deck, the bows chased with cupids blowing conch shells, mermaids on other side. Imitation Augsburg mark, one Swedish, on French-English import mark for 1902.

The nef is probably a German piece, dating from the turn of the twentieth century, and was used as a salt cellar. Nef derives from the Latin navis meaning vessel. Silver galleons with all sails set and pennons flying have, for more than eight hundred years, found a prominent place on the English dining table, first as a symbol of power, then for the service of wine. Silver ships have been recorded in Court circles without intermission since the middle of the twelfth century, when Henry II brought two richly wrought golden nefs set with diamonds and pearls from his French province of Anjou. Piers Gaveston, at the court of Edward II in 1320, boasted a silver nef on four wheels, the earliest recorded example of an undercarriage. In 1392 a nef on wheels was recorded in the Papal collection. On the deck of the fashionable nef stood carefully modelled figures of the owner himself, his wife and family and immediate entourage, all sculpted in silver. The rigging and deck was lifted to reveal a space used to hold the cutlery and table linen. Sometimes cannon, filled with real gunpowder, were fired to propel the nef across the table.The use of the ceremonial nef declined during the Cromwellian period in the mid-seventeenth century, but after the restoration of the monarchy the silver ship returned to the dining table, mostly employed in the service of wine. Many reproductions were made, chiefly in Holland.