'The Lady of the Order of the Pug' 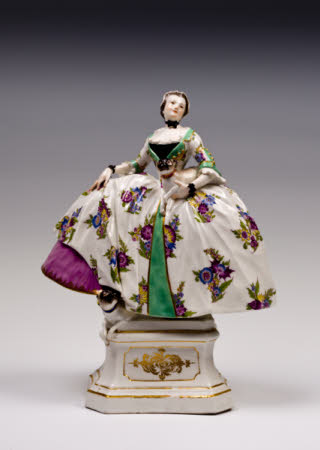 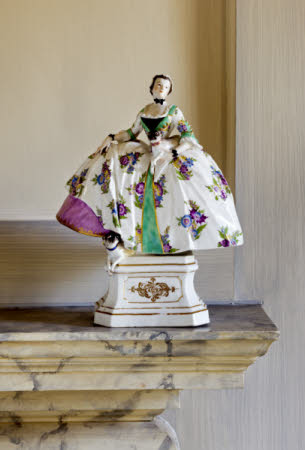 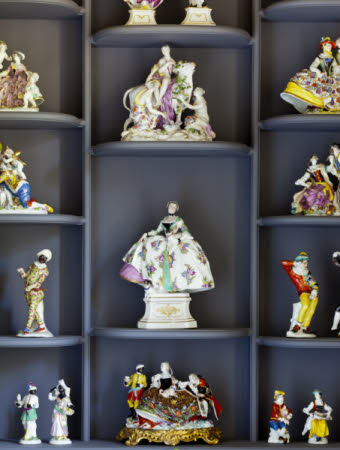 A Meissen porcelain figure of the Lady of the Order of the Pug ('Dame von Mopss Orden'), modeled by Johann Joachim Kändler, Germany, c.1745. Figure in lace cap, black bodice, white flowered and gilt dress trimmed with green over a mauve hoop, carrying a pug-dog under her left arm, another lies at her feet, on a rectangular white pedestal base decorated with gilt scrolls in panels. Mark, crossed swords in blue at back.

Since its creation, the Meissen figure of the Lady of the Order of the Pug (‘Dame von Mops Orden’) has been the prized possession of many collectors. Elevated on a tall, square pedestal, the noblewoman, dressed in a sack-back gown (robe à la française) and a ruched dormeuse (a muslin mob cap, indicating that she is indoors), wears a simple black ribbon at her neck and wrists. In her arms is a pet pug with a pink collar, while another in a blue collar, partially hidden by the woman’s voluminous skirt worn over a pannier, relaxes at her feet. The model first appeared in June 1744 in the payment reports (Taxa) for commissioned overtime work executed by the porcelain sculptor Johann Joachim Kändler.The figure was conceived as a pair to a high-ranking German nobleman wearing the Order of Freemasons, dressed in the trappings of a stonemason, created by Kändler in September 1743. The figure of the lady was commissioned by the ‘Printzessin von Herfordt’, Princess Henriette Amalie of Anhalt-Dessau (1720–93), an unmarried mother who had been exiled to a religious foundation for noble ladies at Herford and at the time was Canoness of Herford. The Order of the Pug (Mopsorden) was a secret Masonic-style society believed to have been founded by the Elector of Cologne, Clemens August of Wittelsbach, following Clement XII’s papal bull banning Masonic orders in 1738. The order’s emblem was the pug, a symbol of loyalty, devotion and fidelity, and members, including noblewomen, called themselves pugs and barked during initiation rites. Augustus III was the grand master of the order in Saxony, and the Meissen manufactory produced a number of porcelain pugs in the early 1740s, some used during the order’s ceremonies. The society was exposed with the publication in 1745 of the abbé Gabriel-Louis Calabre Pérau’s book 'L’ordre des Franc-Maçons trahi et le secret des Mopses revélé'. On 21 May 1886, the determined and dedicated collector Mrs William S. (Millicent) Salting (d.1925), of Berkeley Square, bought the prized figure for £168 at the sale of the celebrated collection of William Ward, 1st Earl of Dudley (1817–85), of Dudley House, Park Lane. She was the sister-in-law of one of England’s greatest ceramic collectors, George Salting (1835–1909), whose wealth derived from sheep-farming and sugar-growing in New South Wales. The provenance was listed as the ‘Duc di Forli’, the Neapolitan patrician Don Nicola Carafa Cantelmo Stuart, Principe di Policastro and Duca di Forli e della Chiusa (1829–94). Several years early, Mrs Salting had purchased five Meissen figures at the sale of the collection belonging to the ‘Duc di Forli’ at Christie’s, on 1 March 1877. She must have been thrilled finally to acquire the figure, having lost it to Lord Dudley at the 1877 sale, when it fetched £215, the second highest price. Text adapted from Patricia F. Ferguson, Ceramics: 400 Years of British Collecting in 100 Masterpieces, Philip Wilson Publishers, 2016.