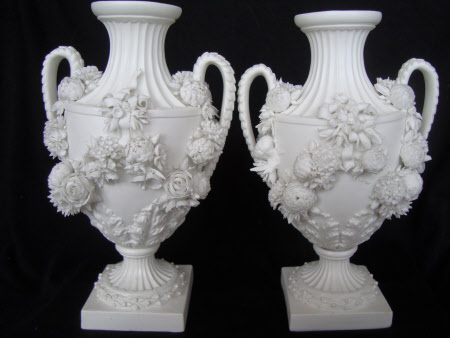 [Saved] One of a pair of urn-shaped vases, with two imbricated loop handles, festoons of flowers hanging from the shoulder, acanthus foliage in relief and square plinth.

One of a pair of urn-shaped vases, with two imbricated loop handles, festoons of flowers hanging from the shoulder, acanthus foliage in relief and square plinth. Probably the ‘Vases with Best Festoons’ listed in J. Halsem. Soft-paste biscuit (unglazed and undecorated) porcelain. Note: The shape is rare and not recorded, however, the model no. 111 does appear in the Derby factory Day Books sales records, described as ‘vases with festoons of flower’ costing 10s 6d; it was frequently purchased by confectioners. The Victoria and Albert Museum, London, has a pair of smaller vases with simpler festoons, marked with the same incised factory marks, but also a model number, ‘No. 116’ (C.294&A-1935). However, the model number ‘No. 116’ does not relate to the recorded figure series. One of the V&A vases has an incised triangle used by the repairer Joseph Hill to mark his work, and the other is incised with a star used by the repairer Isaac Farnsworth (active 1756-1821). The repairers were the specialists who built up the figures or vases from the pieces formed in the many moulds used in slip-cast production. Vases matching the pair at the V&A, also inscribed No. 116, are in the collection at Saltram House, Plymouth, Devon, where there is documentary evidence that Theresa Parker, Lady Borringdon (1745-75), had a collection of biscuit wares; and another is in the collection at Althorp, along with vase model no. 56.

Base: A ‘D’ in script beneath a crown, crossed batons and six dots, three scores and six-point star for the repairer Isaac Farnsworth.