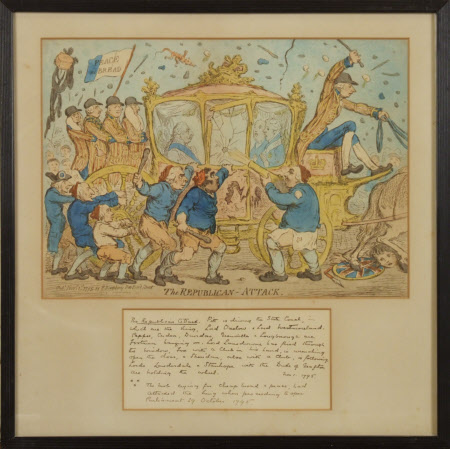 Print with watercolour on paper in frame.

Mounted as part of frame: The Republican Attack. Pitt is driving the State Coach in which are the King, Lord Onslow, Lord Westmoreland. Pepper, Arden, Dundas, Grenville & Loughborough are footmen hanging on. Lord Landsdowne has fired through the window, Fox with a club in his hand is wrenching open the door, & Sheridan, also with a club, is following. Lords Lauderdale & Stanhope with the Duke of Grafton are holding the wheel. Nov. 1. 1795 The mob crying for cheap bread & peace, had attacked the King when proceeding to open Parliament 29. October. 1795