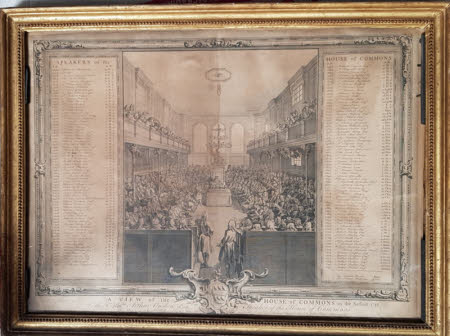 Print on paper behind glass, in gilt frame with pine strainer.

[Saved] Engraving of a view of the House of Commons in 1741, in gilt frame.

Engraving of a view of the House of Commons, in gilt frame with manuscript additions where the print has worn. The eighteenth-century gilt frame has a pine strainer which has remains of a work of art. The lower edge has the title 'Lillingstone-Lovell Hall, Oxfordshire, near Buckingham' with an additional manuscript note 'The Seat of the Honourable Edward Onslow' on laid paper. On the sides of the vertical sides of the strainer can be seen vesitages of the image, including hay stacks on the proper right.