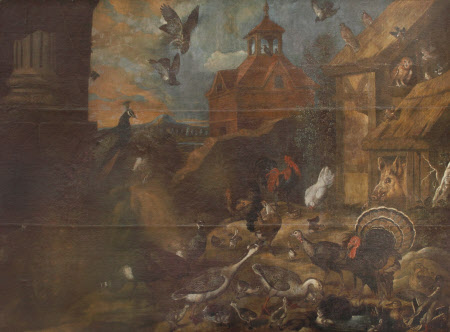 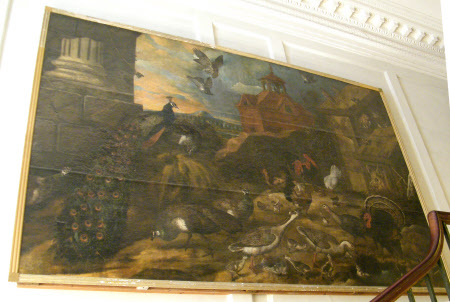 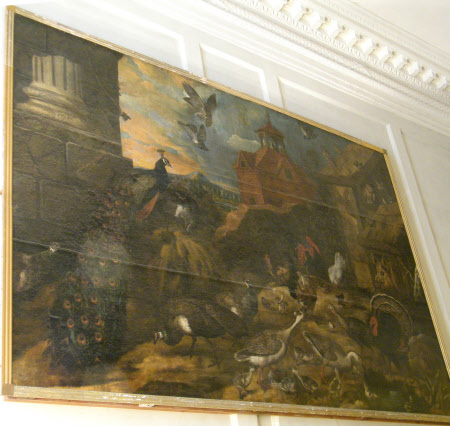 [Saved] Oil painting on canvas, A Farmyard, by Francis Barlow (Lincolnshire c.1626 - London 1704), circa 1667-1681. Farmyard and more exotic birds are seen in the foreground, including white-fronted and greylag geese, mallards, chickens, male and female turkeys, and peacocks, with their young. A hog is in its sty at the right, and a broken classical column is on the left. In the background is a wooden building surmounted by a cupola. On top of the barn is a tawny owl, surrounded by other birds. To the left of the bell tower, a red kite pursues a woodpidgeon in flight.

Evidently, from the dating of NT/CLA/P/86 (1667), one of the three (but possibly more) pictures by Barlow at Clandon originally painted for Sir Robert III Parkhurst, Kt (dubbed 1660; died 1674) at Pyrford; acquired with the latter by Denzil Onslow, MP (1640/1–1721) in 1677, seen by Evelyn there in 1681 (who said that the hall was “adorned with paintings of fowle, & huntings, &c.; the work of Mr. Barlow who is excellent in this kind from the life”), and left by Denzil with Pyrford to his great-nephew, Thomas, 2nd Baron Onslow (1679–1740) at Clandon, where seen by Horace Walpole in 1764 (who mentions “four or five large and good pictures of animals by Barlow”). “Three large Pictures of Fowls” were listed in the Large Saloon in 1778, but only two were mentioned in the house by J.P. Neale in 1826, though he does specifically state that they had come from Denzil Onslow’s seat at Pyrford; Marked in Lady Iveagh’s 1966 Inventory, p47; Accepted by the Treasury in lieu of Estate Duty on the death of Lady Iveagh in 1968 and transferred to the National Trust (1968 Schedule B)