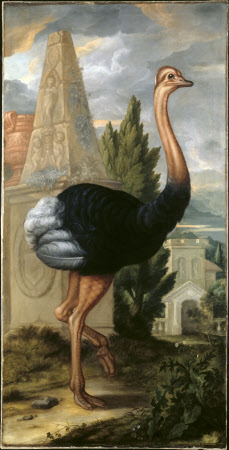 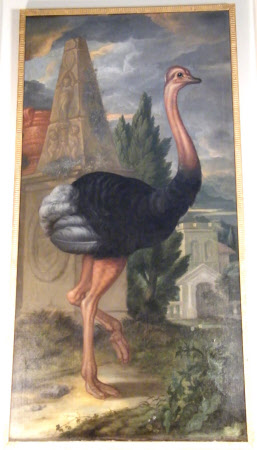 [Saved] Oil painting on canvas, An Ostrich, by Francis Barlow (Lincolnshire c.1626 - London 1704), before 1676. Possibly originally painted for Denzil Onslow at Pyrford Court. A painting of an ostrich in a classical landscape, in profile to the right, standing on a path with its left leg raised. In the middle ground is a monument decorated with a relief of putti. Another structure is in the landscape in the background. A pair of paintings of an ostrich and a cassowary by the artist, of slightly smaller size, were recorded in the collection of Thomas Thynne, 1st Viscount Weymouth. Sold 14 June 2002.

Possibly painted for Denzil Onslow, MP (1640/1–1721) of Pyrford, where probably seen by Sir John Evelyn on his visit to Pyrford Court 24 August 1681. Probably included in his bequest to his great-nephew, Thomas, 2nd Baron Onslow (1679–1740), of Clandon Park, where it was probably one of those recorded by Horace Walpole in 1764; Marked in Lady Iveagh’s 1966 Inventory, p3; Accepted by the Treasury in lieu of Estate Duty on the death of Lady Iveagh in 1968 (1968 Schedule A) and transferred to the National Trust in 1984