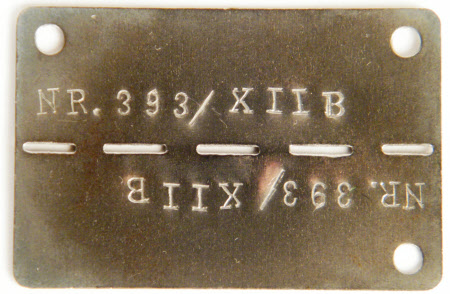 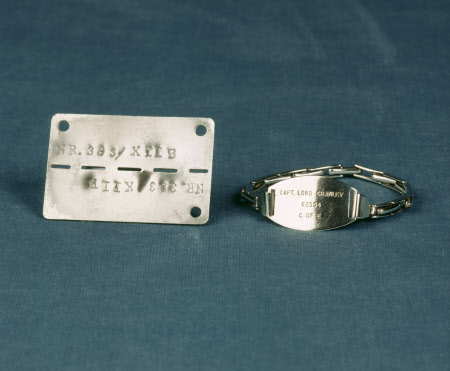 Pressed metal identity tag worn by William Arthur Bampfylde Onslow, known as Captain Cranley (later 6th Earl of Onslow), when he was held as a prisoner-of-war at Offlag 79 in Brunswick, Germany. The crude pressed-metal tag includes a central perforation which was designed to be easily broken in half in the event of the wearer's death whilst in custody. Each side of the tag has the same unique prisoner-of-war number; one half to be kept with the deceased's remains, the other half to be sent back, as proof of death, to the administration of the opposing side and then, presumably on to their family in confirmation of the grim news. Onslow joined the Life Guards in 1931 and resigned his commission in 1938. After war broke out in 1939 he first joined the Territorial Army and spent the early years of the war in the Western Desert where he was awarded the Military Cross (1942). Commanding a regiment of the 4th County of London Yeomanry (Sharpshooters), Onslow led them in the British invasion of Italy. Recalled to England, Onslow and his regiment joined the preparations to liberate France in the D-Day landings in 1944. Captured in an advance, Onslow spent the last months of the war as a German prisoner-of-war.

Marked in Lady Iveagh’s 1966 Inventory, p15 Purchased in 1986 with the aid of a grant from the V&A Museum Purchase Grant Fund and the Monument Trust