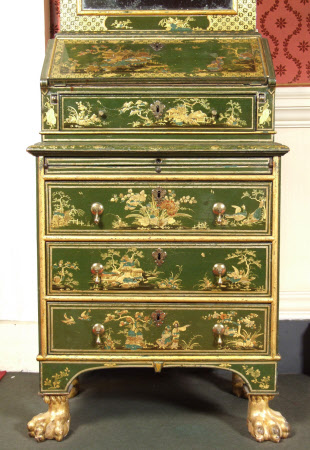 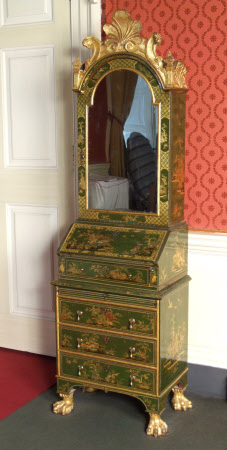 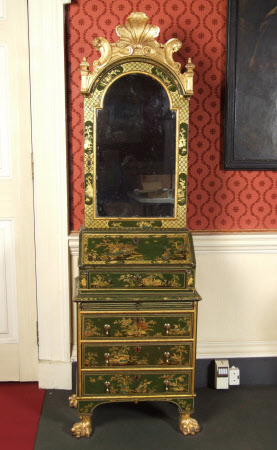 This elegant Bureau forms part of the 1968 bequest to Clandon of fine 18th-century decorative arts and ceramics by Mrs. David Gubbay, one of Britain’s foremost women collectors of the interwar period. Made in Britain of pine and oak, it is finely lacquered both within and without in red and green paint, with gilt, on a dark green ground. This multi-layered and expensively executed ‘Japanning’ lacquer work developed in Europe in imitation of the rare oriental lacquer furniture imported from Asia, becoming much sought after during the reign of William III especially when found, as in this piece, in combination with an elaborate and intricate use of ‘Chinoiserie’ style surface decoration.

[Saved] Small William and Mary green japanned bureau cabinet in three parts, the front and sides decorated with chinoiseries within trellis borders in two tones of gilt, red and green on a dark green ground; the upper part with a shelf and ribbed scrollwork cresting, an arched and bevelled mirror-fronted door, the centre section with a sloping front enclosing a green and red lacquered interior, and with a drawer beneath fitted with the original lidded toilet boxes also decorated in red and green; the lower part with a hinged writing slide, three drawers and giltwood paw feet.