Laban Searching for the Idols 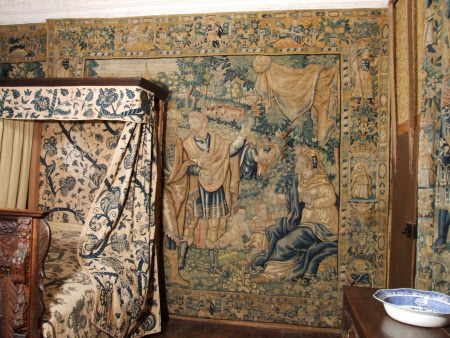 Tapestry, wool and silk, 4 warps per cm, Laban Searching for the Idols from a set of three of the Story of Jacob, Oudenaarde, c. 1560-1580. In the centre stands Jacob, raising his arms, and Laban, wearing a turban and followed by a group of soldiers approaching on the left (Laban and the soldiers are hidden by the bed). In the lower right hand corner Jacob's wife Rachel sits on the saddle of a camel in which are hidden idols stolen from Laban's house, and two infants play beside her. The figures are in a landscape with distant hills, and there is a yellow drape in the branches of a tree at the upper right. The borders include a number of small figures between bunches of leaves and fruit, with a decorative band at the inner and outer edge. The figures include a crowned king holding a sceptre; Minerva, wearing armour and a helmet; Prudence, seated and holding a mirror; and King David, playing a harp and with a sunburst around his head.

This is the first tapestry in the series at Chastleton, and represents Laban catching up with Jacob and his family as they make their journey away from his house to the land of Canaan. Jacob, having served Laban for fourteen years for the hand of his daughter Rachel, finally left without word, taking with him his wives Rachel and Leah, their two handmaidens and their children, as well as the flocks that Laban had given him as payment. When they left Rachel, without telling Jacob, stole the idols from her father's house. Laban had pursued them for seven days in a rage, and when he finally caught up with them he began searching for the idols. Rachel however hid the idols in the saddle of a camel, and sat upon it, and they were not discovered; in the tapestry two golden heads are visible beneath the saddle on which she is sitting. In the background Jacob appears again driving speckled brown cows, representing the livestock that Laban had allowed him to take (Genesis, 30-31). The three tapestries in the Fettiplace Room tell part of the story of Jacob, following the book of Genesis. Jacob and his twin brother Esau were born when their parents Rebecca and Isaac were entering old age, having been married for twenty years. Esau was the first twin to emerge, and was hairy all over; Jacob emerged second, holding on to his brother’s heel. Esau grew up to be a hunter, but Jacob was a quiet man. Jacob bought Esau’s birthright (the right to be considered the firstborn) for a mess of pottage, and with the help of their mother Rebecca he deceived their ageing and blind father into giving him the blessing that was meant for Esau, as the eldest son. Esau was angry and resolved to kill his brother, so Rebecca arranged for Jacob to be sent away to the land of her brother Laban in search of a wife. Jacob served his uncle Laban loyally for seven years, looking after his flocks, hoping for the hand of his daughter Rachel. But Laban deceived Jacob and gave him his elder daughter Leah instead, so Jacob was forced to serve another seven years for Rachel. Jacob finally took his wives and livestock and left Laban’s house, the subject of the first tapestry at Chastleton. The second tapestry, that hangs between and over the two doors, shows Jacob and Laban making a sacrifice and vowing not to harm one another, and the third tapestry, to the left of the bed, shows Jacob and his brother Esau being reunited after many years. The tapestries are not signed. Ingrid de Meûter has attributed the set to the town of Oudenaarde, based on the distinctive design of the narrow decorative bands at the inner and outer edges of the borders (de Meûter 1998). The style, colouring and execution are all typical of Oudenaarde in the second half of the sixteenth century. The early history of the 'Jacob' set at Chastleton is unknown, but it is possible that they were among the tapestries recorded in Walter Jones's inventory of 1633. This inventory included "three large peeces of Arras" in the Fettiplace room at Chastleton, valued at £25: a price perhaps too low for the 'Jacob' series, which would still have been relatively new in 1633 (Marsden 2000). (Helen Wyld, 2012)