The River Ogwen at Cochwillan Mill, with the artist fishing, watched by General Cartwright 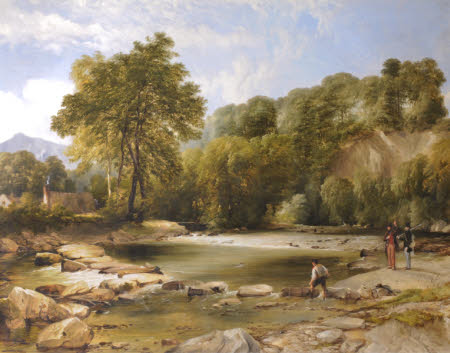 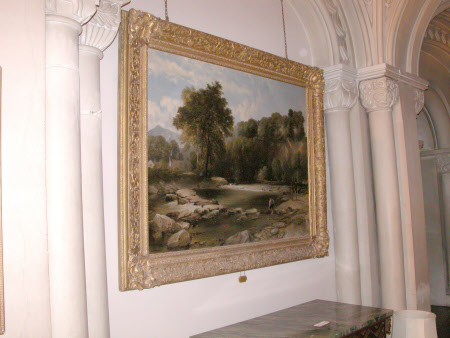 Called ‘Landing a Salmon’ when it was exhibited at the Royal Academy in 1849, the artist has shown himself bringing a salmon to the net held by a keeper, Robert Buckland. The spectator is General Cartwright, a friend of Lord Penrhyn. The artist spent some time in Wales between 1848 - 1849, as other known pictures of Ogwen river and a lake in North Wales testify. A number of these pictures were also painted jointly with Thomas Sidney Cooper.

Oil painting on canvas, The River Ogwen at Cochwillan Mill, with the artist fishing, watched by General Cartwright by Frederick Richard Lee, RA (Barnstable 1798 – Cape Colony 1879), signed and dated FR Lee RA / 1849. Three figures, one fishing, lower right with a mill on the left. The artist brings a salmon to the net; Keeper Buckland and General Cartwright look on. The topography is not exact.

Commissioned by Colonel Edward Gordon Douglas-Pennant, 1st Baron Penrhyn (1800 – 1886); thence by descent to Hugh Napier Douglas Pennant, 4th Baron Penrhyn of Llangedai (1894 – 1949), who left Penryhn and its estates to his niece, Lady Janet Marcia Rose Pelham (1923 - 1997), who with her husband John Charles Harper, thereupon assumed the name of Douglas Pennant, and in 1951 made over the castle and part of its contents in lieu of death-duties to HM Treasury (from the estate of Hugh, 4th Baron Penrhyn (1894 – 1949), which transferred them to the National Trust for display at Penrhyn Castle, 1961.