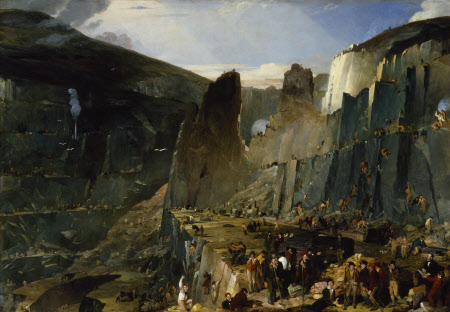 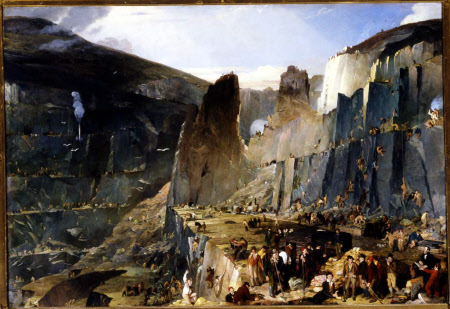 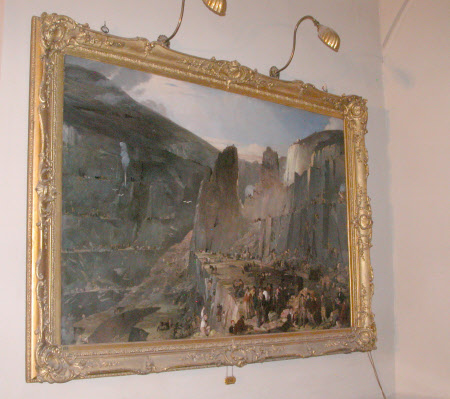 The slate quarry of Penrhyn was once one of the two largest in the world. Slate was used in schools, as blackboards and writing-slates and on buildings as roofing, cladding, shelves and cisterns. The quarry became a popular tourist attraction, regarded as an example of a spectacular process of the Industrial Revolution and a new wonder of Nature developed by man. Princess Victoria, then 13 years old, visited the quarry on 8 September 1832, and described the event in her diary: "It was very curious to see the men split the slate, and others cut it while others hung suspended by ropes and cut the slate; others again drove wedges into a piece of rock and in that manner would split off a block. Then little carts about a dozen at a time rolled down a railway by themselves". This is most likely a commemorative picture possibly after or in anticipation of the Royal visit, painted for George Dawkins-Pennant (1764 -1840) who rebuilt Penrhyn Castle in its massive neo-Norman style between 1819 and 1834. The artist has shown himself sketching the scene in the bottom right-hand corner, and in the centre, in a rather surprising artistic allusion: a gesticulating boy adopts the pose of Reynolds's celebrated Infant John the Baptist in the Wilderness. He is pointing heavenward, reminding the viewer that all this mighty endeavour is but human, and is subject to the mightier hand of God.

Oil painting on canvas, The Penrhyn Slate Quarry by Henry Hawkins (fl.1820-1881), signed bottom right on a stone: Hy Hawkins 1832. Dozens of figures; large pointed rock in middle distance. Gallery level right. The picture evidently contains a number of portraits, including the artist himself in the bottom right-hand corner. A foreground figure, in the centre is derived from Reynolds's "Infant St John the Baptist". Princess Victoria, then 13 years old, visited the quarry on 8 September 1832, and described the event in her diary, and this picture may be comemorative. The picture depicts the quarry from the lower side,showing in the middle distance Talcen Mawr or `Gibraltar rock', blown up in 1895.

Presumably commissioned by George Hay Dawkins-Pennant (1764 - 1840); thence by descent to Hugh Napier Douglas Pennant, 4th Baron Penrhyn of Llangedai (1894 – 1949), who left Penryhn and its estates to his niece, Lady Janet Marcia Rose Pelham (1923 - 1997), who with her husband John Charles Harper, thereupon assumed the name of Douglas Pennant, and in 1951 made over the castle and part of its contents in lieu of death-duties to HM Treasury (from the estate of Hugh, 4th Baron Penrhyn (1894 – 1949), which transferred them to the National Trust for display at Penrhyn Castle, 1961.