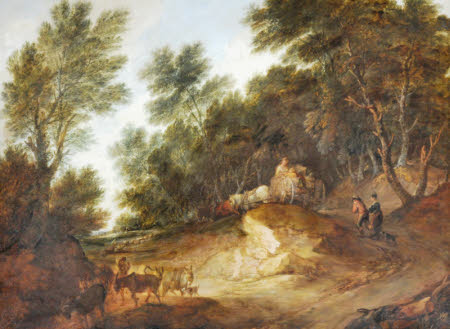 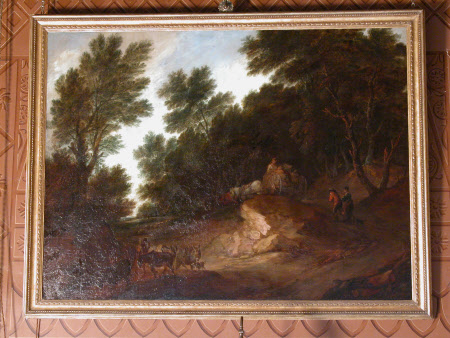 Oil painting on canvas, Wooded Landscape, Thomas Gainsborough RA (Sudbury 1727 - London 1788). A cart with peasants on a rough road. Children with donkeys in left foreground. Although the view is probably imaginary it was painted shortly after the artist’s return from a tour of the Lake District in 1783. A reduced version is at Sudley House (Walker Art Gallery); another in the Metropolitan Museum of Art, New York.

Caulfield collection; bought by Farrer on behalf of Colonel the Hon. Edward Douglas-Pennant, 1st Baron Penrhyn of Llandegai (1800 – 1886); thence by descent to Hugh Napier Douglas-Pennant, 4th Baron Penrhyn of Llangedai (1894 – 1949), who left Penryhn and its estates to his niece, Lady Janet Marcia Rose Pelham (1923 - 1997), who with her husband John Charles Harper thereupon assumed the name of Douglas Pennant; accepted by HM Government in lieu of inheritance tax and allocated to the National Trust for display at Penrhyn Castle, 2002.