The Conversion of Saint Hubert 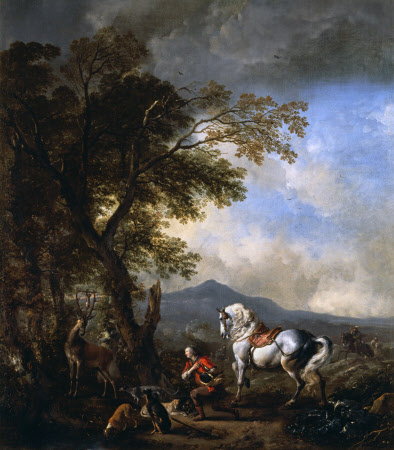 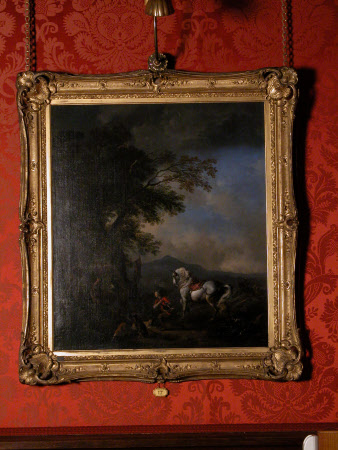 An unusual subject for the artist, who is known for his landscapes with horses and riders, the painting is supposed to have been painted as a gift for a Catholic priest of Haarlem, Cornelis Catsz. It shows a scene from the life of St Hubert (d.727), who as a young man leading a dissolute life, was converted by the apparition of a speaking crucifix between the antlers of a stag at bay: "Why are you pursuing me? I am Jesus, whom you honour without being aware of it". He is said to have sought advice from St Lambert and subsequently became Bishop of Tongeren/Maastricht himself, transferring later to Liège. He is now a patron saint of hunting and his relics lie in an abbey, named after him, in the forests of Ardennes. The legend is taken from that of St Eustace in the 15th century and the depiction of the hounds are borrowed from Dürer's famous engraving of the Latin saint, as well as, possibly, the vertical format. It was acquired by the great Flemish dealer Lambert Jean Nieuwenhuys (1722—1862) in 1817 who sold it to the Prince of Orange, later King Willem II of the Netherlands (1792—1849), but even though one of the more remarkable collections of the 19th century it was nevertheless dispersed as the Dutch government had to pay off the Royal debts. The painting was for a short time with the Baron von Mecklenberg, a great Dutch art collector, and, after his death in 1854, was acquired by Christian Johannes Nieuwenhuys (1799 – 1833), the first dealer’s son, who sold it to one of his preferred clients, Colonel Edward Douglas-Pennant, later 1st Lord Penhryn (1800—1886).

Oil painting on canvas. The Conversion of Saint Hubert by Philips Wouverman (Haarlem 1619 - Haarlem 1668), signed on rock, bottom right: PHILIPS (in monogram) W/ 1660. The saint, in the centre, in red, in contemporary clothing to the artist, is dismounted from his horse and kneels towards a stag on left with a crucifix in its horns. His white horse stands on three legs behind him to the right. In the background the hunt follows furiously behind.