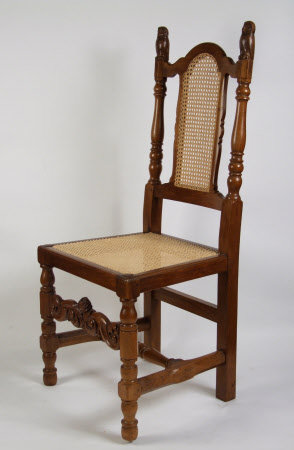 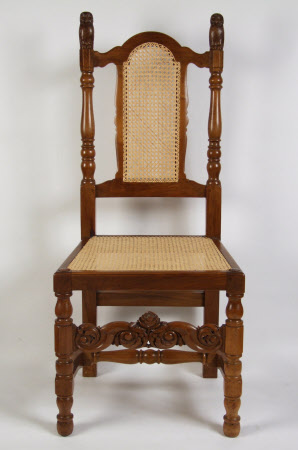 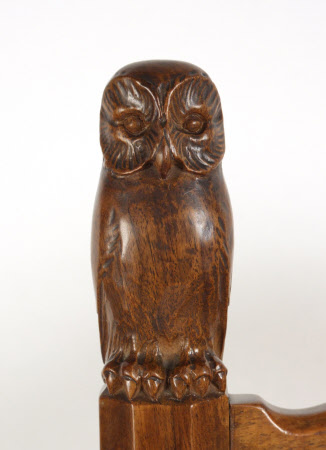 One of a set of eight stinkwood or walnut and cane dining chairs, designed by Sir Herbert Baker and probably made by Joseph Armitage, circa 1920. In the Dutch 17th century style and including a pair of open armchairs, each chair distinctively carved with pairs of finials representing people or places, including a bear (Sir Herbert's nickname), the owl (after Owletts, his home), the lion (based on the emblem of India), the good and bad girl (his daughter Ann), the gargoyle (his son Alfred) and the Zimbabwe bird (national emblem), each chair with arched toprail and caned panel flanked by baluster posts carved with the various finials, the caned seat raised on baluster and octagonal legs joined by a pierced and scroll-carved front stretcher. These chairs are shown in situ in the Country Life article of 31 December 1943 entitled 'Cobham, Kent : Owletts' by Christopher Hussey.

Joseph Armitage (1880-1945) was an architectural sculptor, wood carver and stone carver for whom Sir Herbert Baker was an important patron. Their collaborations include the W. G. Grace memorial outside Lord's cricket ground and the sculptural schemes for India House, South Africa House and the Bank of England. Independently, Armitage designed the National Trust oak leaf symbol.