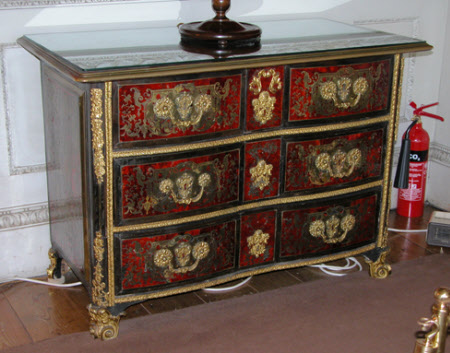 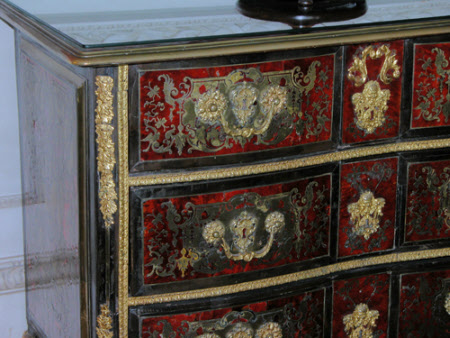 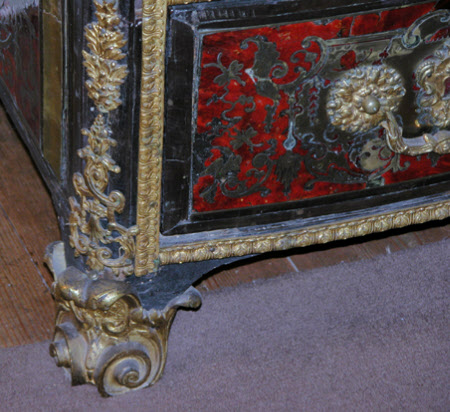 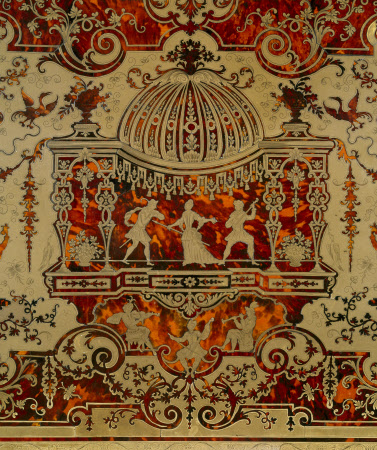 A brass inlaid tortoiseshell and ormolu mounted 'Boulle' commode, attributed to Nicolas Sageot (1666-1731) Paris, circa 1705 The rectangular top with cast brass edge and veneered with première partie marquetry depicting a central pavilion with dancing figures, musicians and performers. With further figural scenes, birds and animals and with arabesques and trailing scrolling foliage. With two short and two long drawers inlaid with conforming designs and with intricate cast handles and escutcheons flanked by cast mounts to the rounded corners. The side panels also inlaid with similar designs. Raised on scroll cast feet.

This commode shares it attribution with the bureau Mazarin (NT1398377) in the drawing room at Felbrigg. The inlaid brass panels are very similar to a desk stamped by Nicolas Sageot in the Royal Collection, Stockholm. Another comparable example of identical form with shaped aprons and nearly identical marquetry, also attributed to Nicolas Sageot, is in the Ermitage Museum, St Petersburg (from the Roudanovski collection). Nicolas Sageot, was born in 1666. His atelier was probably active from 1690, though the first records date from 1698 when he employed two workers. Sageot worked until 1706 as an ouvrier libre, before his appointment as maître in 1706, and was based in the faubourg Saint-Antoine. He evidently rapidly expanded his business, as by 1711 he had 12,000 livres, almost all in stock-in-trade. The extensive nature of his business is revealed by the sale in 1720 to Léonard Prieur 'Marchand Mercier Grossier Joaillier Priviligié suivant la Cour' of 16,000 livres of furniture, consisting of a wide range of armoires, bureaux and commodes and amongst which were several 'armoires à dôme' in brass-inlaid tortoiseshell, valued between 400 and 1000 livres. Retiring on 26 July 1720 he sold 16,000 livres worth of furniture, all of which was decorated with brass and tortoiseshell marquetry. P. Grand, 'Le Mobilier Boulle et les ateliers de l'époque', L'Estampille L'Objet d'Art, February, 1993, pp. 50 See also NT485368 for a desk with similar inlay at Petworth House, Sussex (James Weedon 2017)