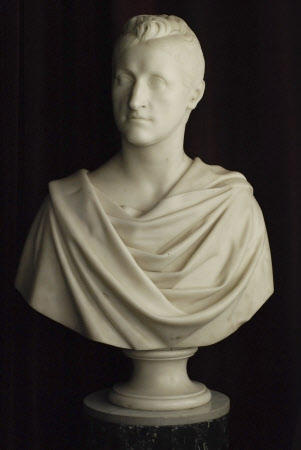 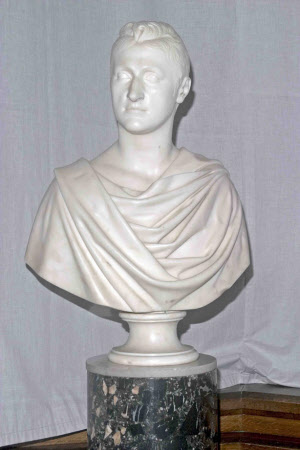 Lorenzo Bartolini, the son of a Tuscan blacksmith and a drummer in Napoleon’s army became a pupil of David and a friend of Ingres on his arrival in Paris. He was later the Director of the Academy at Carrara but a mob destroyed all his work there in 1813. After his revolutionary years he settled in Florence making portrait busts for aristocratic patrons, who came to visit his studio from all over Europe, and ideal figures and monuments in the neo-classical style, the latter inspired somewhat by John Flaxman’s engravings. He seems to have fallen out of favour with the English after the mid 1820s though, as Canova and Thorvaldsen became more fashionable. The bust of the Marchioness of Bristol (1775-1844) at Ickworth (NT 852210) is a pair with her husband, Frederick William Hervey, 1st Marquess of Bristol (1769-1859).

White Carrara marble sculpture, Frederick William Hervey, 1st Marquess of Bristol, MP, FRS, FSA (1769-1859) by Lorenzo Bartolini (Vernio, Tuscany 1777 – Florence 1850), 1815/18. A portrait bust, turned slightly to the left, short hair, in classical robes on marble socle. He was father of William Howe Windham's wife, Lady Sophia Hervey. He married Elizabeth Alban Upton (1775 - 1844), the daughter of Clotworthy Upton, 1st Baron Templetown in 1798 and they had nine children.The pendant of his wife is at Ickworth (NT 852210). The plaster models of both busts, survivors from the sculptor's studio, are now in the Galleria dell'Accademia, Florence. The sculptor also enjoyed the patronage of the 6th Duke of Devonshire who was the stepson of Hervey's sister, Elizabeth.