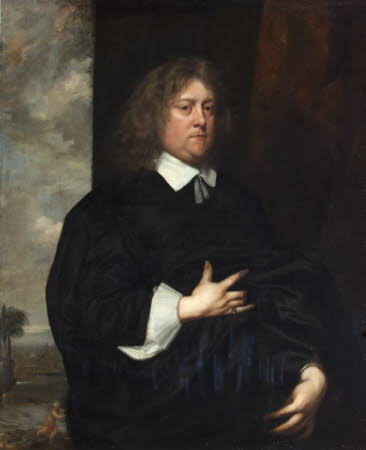 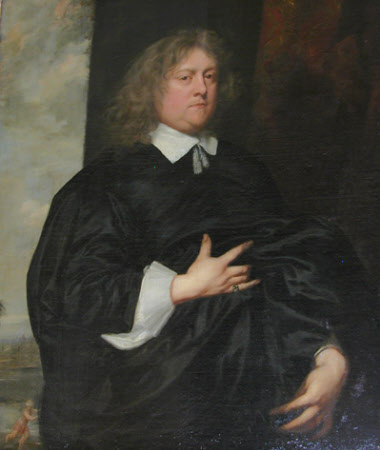 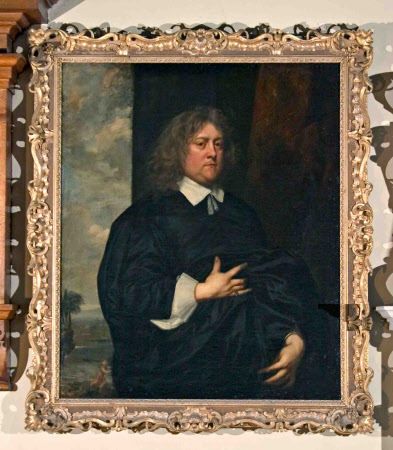 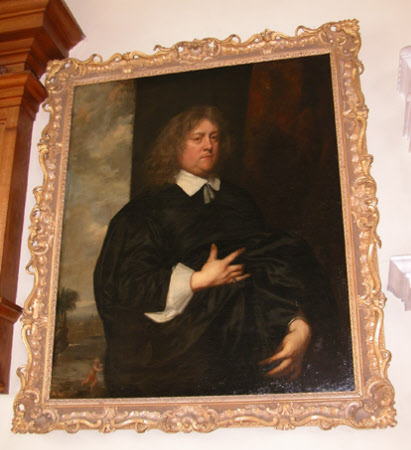 William Paston was a remarkable figure, noted for his extensive travels and as most likely being responsible for acquiring the bulk of his family's vast and princely collection, now lost, once held in the family Norfolk country house, Oxnead Hall, at the height of their wealth and fame. After the death of his first wife, Lady Katherine Bertie (d.1636/7), Paston travelled extensively to Italy, Palestine and Egypt. He commissioned Nicholas Stone to construct a monument to deceased wife in St. Michael’s, Oxnead, which was inscribed with a moving and tender inscription from her ‘sad Consort.’ Stone also remodelled Paston’s house, Oxnead Hall between 1631 and 1642. This picture was probably painted in 1642-3, when Paston, due to his Royalist sympathies, was forced into exile in Holland. His clothing and jewellery reflect Dutch fashions of this date. The small scene in the foreground, showing a man fleeing from a crocodile, which is devouring his companion, could have referred to an escape from troubles in the Civil War, or perhaps represented an episode which occurred when Sir William was travelling in Egypt. This portrait is the only known oil which certainly depicts William Paston. A later engraving was made in 1659, but no painted original for this is known.

Oil painting on canvas, Sir William Paston, 1st Bt (1610-62/3), Anglo-Dutch School, circa 1643/4, (possibly by Henry Stone). A three-quarter-length, portrait of a man, standing, dressed in black with right hand across breast, turned to his right. Behind to the right is a dark curtain and to the left a strip of landscape in which a man is seen escaping from a crocodile which is devouring a second man. Son of Sir Edmund Paston of Paston and Katherine Knyvett of Ashwellthorpe. In 1629 he moved to Oxnead Hall. In 1636/7 he travelled to Jerusalem and Egypt where he experienced the adventure with the crocodile. Created baronet in 1641, he joined the Royalist cause, and was forced into exile in 1643-4 in Holland, where this picture might have been painted by Adriaen Hanneman (1601-71). The sitter was the son of Sir Edmund Paston of Paston Hall (d.1632) and Katherine Knyvett of Ashwellthorpe (d.1639) [whose affectionate letters to her son were edited by Ruth Hughey and published by the Norfolk Record Society]; created baronet, 1641. Following the death of his first wife, Lady Katherine Bertie (m.1629; d.1636/7), he travelled in Italy, Palestine and Egypt. Sir William’s second wife was Margaret Hewitt, sister of Sir George Hewitt, who married George Strode after his death. He commissioned Nicholas Stone to remodel Oxnead Hall between 1631 and 1642, to make the movingly inscribed tomb of his first wife (who died in childbirth) in St Michael’s Oxnead, and to execute the memorial to his mother in 1639 in Paston Church; was a patron of art (vide the still-life of his collections in Norwich Castle Museum & Art Gallery) and learning; and possessed a famous library at Oxnead, where he was the first of his branch of the family to settle; and espoused the Royalist cause. As a result of this he was forced to withdraw to Holland from 1643-44, and his estates were sequestrated. This began the incumbering of those estates with debt, compounded by the extravagance and/or unfortunate political allegiances of the remaining scions of the family, beginning with his son, Sir Robert, created 1st Earl of Yarmouth, and ending with the latter’ son, William, 2nd and last Earl of Yarmouth, on whose death in 1732 Oxmead was broken up, sold, and ultimately demolished. Though buried at Paston, Sir William has no monument. (For a pocket biography of him, see David Yaxley’s, Sir William Paston, 1995, published by Larks Press, Dereham.)

Originally at Oxnead, Norfolk, the family home of the Pastons; almost certainly acquired at the 1732 break-up sale; 1764 inventory (Second Room): Sir William Paston of the Yarmouth Family; thence by descent to Robert Wyndham Ketton-Cremer (1906 - 1969), by whom bequeathed to the National Trust in 1969 Part of the Windham Collection. The hall and contents were bequeathed to the National Trust in 1969 by Robert Wyndham Ketton-Cremer (1906-1969)