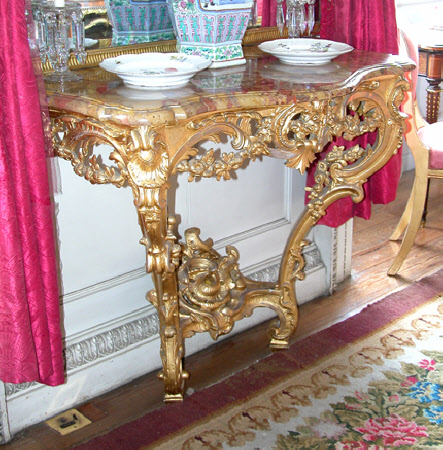 One of a pair of carved gilt wood and marble console tables, English, Norwich, circa 1820, by William Freeman (1784-1877) With a shaped marble top with moulded edge above a shaped frieze carved with scroll and floral borders and garlands of flowers. The legs carved with further scrolls and leaf decoration with scrolling feet and joined by a stretcher with conforming carved decoration By repute these tables were supplied to Felbrigg by William Freeman circa 1830. This pair of tables share certain details and techniques to a single side table at Blickling Hall (NT354316) with an applied paper trade-label of 'Freeman of Norwich' Three generations of the Freeman family, Jeremiah and several Williams, worked at various addresses in Norwich from the late 18th century, their paper label gives the impression that they were also in London but are listed as having premises in London (Lane) and Swan Lane. They describe themselves as 'Carvers, Gilders & Looking Glass Manufacturers wholesale and retail' William Freeman is recorded in the ‘Dictionary of English Furniture Makers 1660-1840’, published by the Furniture History Society, as being made a freeman of Norwich on 24 February 1811, and licensed as a cabinet maker; pieces of his furniture, stenciled with his name, are noted.