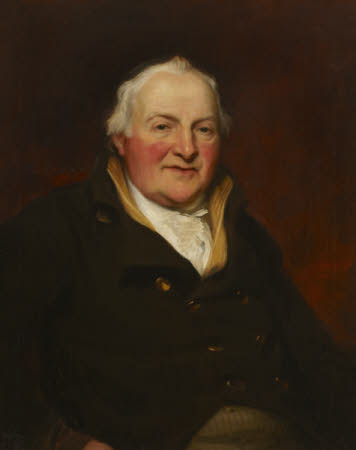 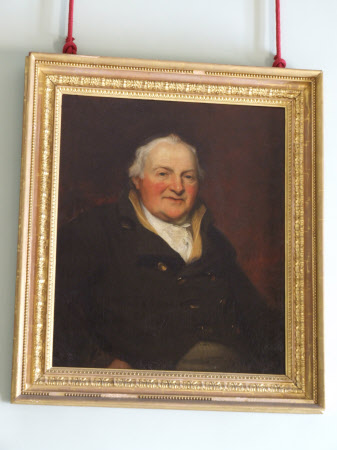 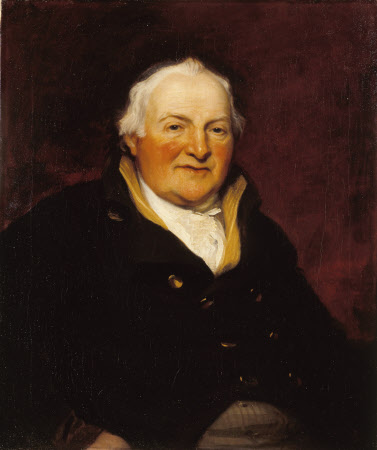 Oil painting on canvas, William Battine FRS (1765-1836) by Thomas Phillips RA (Dudley 1770 – London 1845), inscribed on the back of the canvas W. Battine 1803. A half-length portrait of an elderly man, wearing a black coat, yellow waistcoat and white stock. A prosperous lawyer, occasional writer and leading local Whig politician. The son of Lord Tankerville's agent, he was a friend of Sir Harry Fetherstonhaugh, and like him, also of the Prince of Wales in his youth. A similar portrait is at Petowrth (NT). The sitter was born at East Morden, Sussex, he was supposed to be one of tye co-heirs to the long dormant barony of Bray, through his mother. Educated at, and a precocious fellow of Trinty College, Cambridge, in 1785 he was admitted fellow of the College of Doctors of Law in London, and developed an extensive practice in the admiralty and eccelsiastical courts. From 1812 to 1827 he was one of the Gentlemen of the Privy Chamber in Ordinary. He is said to have been a friend of the Prince of Wales ( though his frinedship with Sir Harry?) and to have settled a quarrel between him and his father. In 1822 he published 'Another Cain: a Mystery', a dramatic poem " to correct the blasphemy put into the mouth of Lucifer" in Lord Byron's 'Cain' in his own word. In old age he contrcared eccentic habits and squandered his wealth which doubtless resulted i nwhatever indignity prompted him to publish the unadted papmphlet ' letter to the Judges of the King's Bench' which argues that the Gentleman of the Privy Chamber are exempt by privilege from arrest in civil suits. He died a pauper. He was one of the four people (the others being Whigs and Whig hero, Charles James Fox, Francis, 5th Duke of Bedford and Napoleon) whom Sir Harry chose to commemorate with busts in the Dining Room at Uppark - his being on the other side of the wall of his portrait by Phillips at Uppark.

purchased by the National Trust from the Trustees of the late R.J. Meade-Fetherstonhaugh, Esq. in 1978