A Picture Gallery with Fashionable Visitors 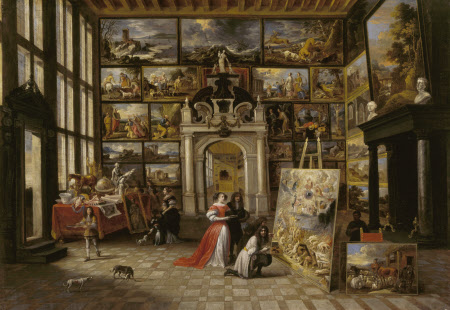 Oil painting on canvas, A Picture Gallery with Fashionable Visitors, by Hieronymus Janssens (Antwerp 1624 - Antwerp1693), 1660s. An imaginary gallery, the walls of which are covered with pictures, and in which a group of three figures is admiring a canvas of the Last Judgement, supported by an easel in the foreground; a table by a window at the left has on it pieces of sculpture, a globe, and other objects. By the 1660s, the probable date of this picture, David Teniers the Younger had established a fashion for realistic descriptions of such picture galleries. Janssens harks back to an earlier Flemish tradition of more allegorical depictions; the contrast between the precious objects on the table at the left and the 'Last Judgement' in the foreground points to the ultimate vanity of early pleasures. The picture hanging at the right of the top register is similar to the Staghunt by Snyders in the Brussels Museum.

Purchased by the National Trust from the Trustees of the late R.J. Meade-Fetherstonhaugh, Esq. with the help of a grant from the Purchase Grant Fund, 1976.