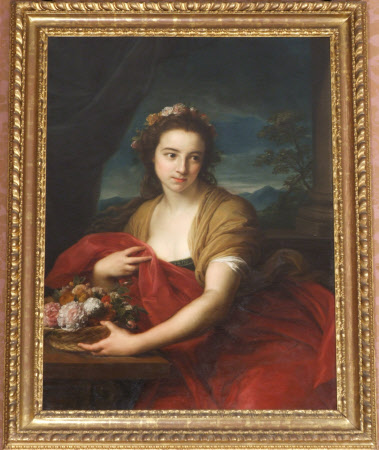 Oil painting on canvas, Katherine Durnford, later Mrs Utrick Fetherstonhaugh, as Flora by Pompeo Girolamo Batoni (Lucca 1708 – Rome 1787), signed as embroidery on dress: P. B. 1751. A half-length portrait leaning to the left on a console on which she holds a basket of flowers; she wears a red cloak which she holds to her body with her right hand. Traditionally described as Charlotte Durnford. But as a letter from Miss Lynn Allen (7th September 1982, in file) makes clear, it was Katherine, not Charlotte, who married Utrick Fetherstonhaugh. Charlotte married Robert Raynor of Docking, Norfolk. The sitter was the sixth daughter of Dr Durnford, Vicar of Harting, and wife of the Reverend Utrick Fetherstonhaugh, younger brother of Sir Matthew Fetherstonhaugh, whom she and her future husband joined on the family's Grand Tour in 1749 - 51.