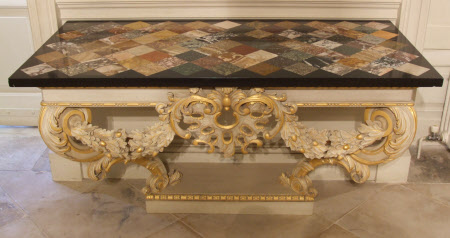 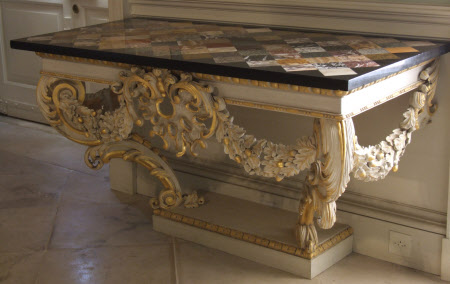 A specimen marble veneered top, possibly English, circa 1750, raised on a parcel gilt and painted wood console table, English, a replica supplied in 1996, carved by Alan Lamb and gilded by Sophie Budden. The frieze is centred by a cartouche with a pierced acanthus leaf issuing oak leaves swags joining the double-scrolls front legs raised on a rectangular plinth. The specimen marble top was rescued from the fire on 30th August 1989 but the original 18th century carved console table, circa 1750, was among the few pieces in the showrooms at Uppark that were destroyed. The present table top is very close to an example made in London by John Wildsmith (f. 1757-1769) for the sixth Earl of Coventry at Croome Court (now in the Metroplitan Museum of Art inv 58.75.13a). It is also framed in black marble inlaid with squares of differently coloured hardstone specimens in a diagonal checkerboard pattern. Such "specimen marble" , inlaid to exhibit different types of marble and hardstones, were produced in Florence and Rome from the second quarter of the eighteenth century. They were thought after by the foreigners on their Grand Tour and the production started to spread in other European cities in the 1750s onwards.

The top and table probably commissioned by Sir Matthew Fetherstonhaugh (1714-1774) circa 1750; by descent; given to the National Trust in 1954 with the house and some of its contents by Admiral the Hon. Sir Herbert Meade-Fetherstonhaugh. The console table was damaged in the Uppark fire in 1989, a replica was presented by Lady Morrison-Scott in 1996.

ALAN GEORGE LAMB ME FECIT 1996 (carved on base)