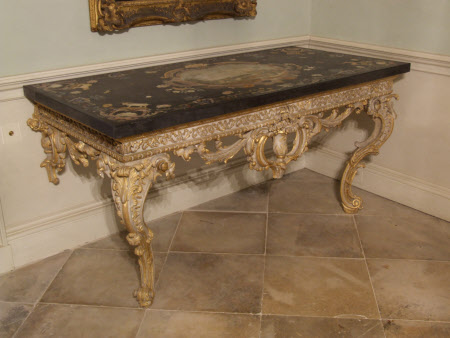 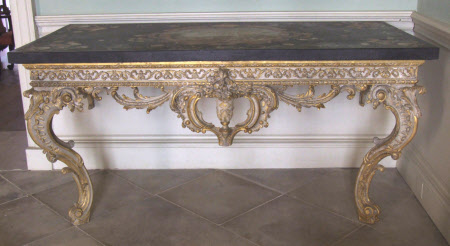 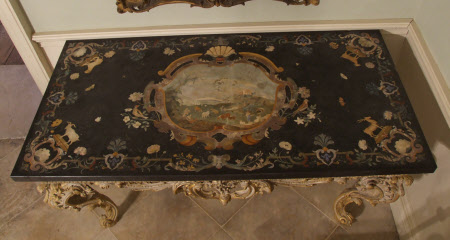 A console table, one of a pair, with a scagliola top, Florence, by Petro Belloni (fl. 1740-1760), dated 1754, on a white-painted and parcel-gilt base or stand, English, attributed to John Bladwell (fl. 1725-1768). The top centred by a strapwork cartouche depicting a landscape, the borders decorated with sprays of flowers, birds, butterflies and a standing animal and a scallop shell to each corner, within an outer border of strapwork and scrolls intertwined with flowers and foliate branches, on a black ground. The base Rococo in design, and with foliate-carved frieze and a pierced apron centred by a vase flanked by acanthus scrolls, on cabriole legs with scrolling foliage and shells terminating in scroll feet. The stands believed to have been painted circa 1815. Both tables were severely damaged by the fire at Uppark in 1989. This table suffered less damage than its pair: its top was broken in two but much of the original scagliola layer survived, and the base loosing only half a leg and some elements of the frieze.--There are only seven documented table tops by Petro Belloni, all commissioned by Sir Matthew Fetherstonhaugh of Uppark and a group of his Irish friends, who travelled to Italy together and were in Rome around 1750. Other known examples were made for Joseph Leeson of Russborough (three scagliola tops restored in 2010 by the National Gallery of Ireland), Robert Clements of Killadoon, and Ralph Howard of Shelton Abbey. At time of writing (December 2018), a previously undocumented table top (also dated 1754) is to be sold by Woolley & Wallis (9 January 2019); their catalogue speculates that it may be one of a pair made for Robert Clements, later 1st Earl of Leitrim. They all follow a similar composition, each having a central scene within a strapwork cartouche against a black ground.The Uppark table tops are signed 'D. Pet. Belloni Vallumbros A. Florenta F. A.D.1754' (this table) and 'D. Pet. Belloni A Florenta F' (its pair). All of the known tables follow a similar composition, each having a central scene within a strapwork cartouche against a black ground.Don Pietro Belloni (fl.1740-1760) was a monk at the monastery of Vallombrosa near Florence, an assistant to the Abbot Don Enrico Hugford (1697-1771) who advanced the art of scagliola as a substitute for pietre dure mosaic so landscapes and figures could be depicted in it. Hugford was previously a monk at the Monastery of Santa Reparata at Marradi, where selenite - the main component of scagliola - was quarried. Petro Belloni was reputedly very slow in achieving such detailed works. A letter from Horace Mann to Horace Walpole dated 11 July 1747 refers to pair of scagliola table tops made around that time for Joseph Leeson and records that Belloni is 'so slow in working that he has been almost three years about a pair for a Mr Leson, and requires still six months more'.Sir Matthew Fetherstonhaugh returned from his Grand Tour in 1751 and his accounts books suggest that the table tops were sent to England in 1755 through the agency of Joseph Smith (English consul in Venice). Indeed, Sir Matthew wrote to Horace Mann at Florence on the 12 October 1753, 'I hope you will excuse the trouble of this, wch is to intreat the favr of you to inquire of the Monk whether he has not done the two tables I bespoke of him, & wch I believe I mention'd to you when I left Florence; they were inlaid Tables, of which kind Mr Leeson had one done' (N.A, S.P 105/310). It was probably on their arrival in England that the carved giltwood (now painted) table or console bases were made to support the tables. John Bladwell, established in Covent Garden, provided carved giltwood furniture to Uppark between 1750-60 and his name occurs several times in Sir Matthew Fetherstonhaugh's accounts books. It is assumed, therefore, in the absence of any other evidence, that he made these bases.

Commissioned by Sir Matthew Fetherstonhaugh (1714-1774) when in Florence during his Grand Tour circa 1750, delivered in 1755; by descent; given to the National Trust in 1954 with the house and some of its contents by Admiral the Hon. Sir Herbert Meade-Fetherstonhaugh.