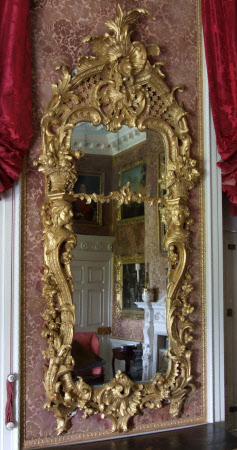 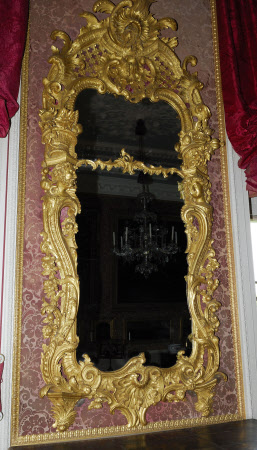 One of a pair of English giltwood pier glasses, C.1760, each with double plate, the borders elaborately pierced and carved, the sides with terminal busts, on S scroll supports, bearing baskets of flowers on their heads, the whole with shell and wave ornament and foliage, the tops similarly carved with wave ornament and with trellis and rosette panels surmounted by waved crestings. Attributed to Matthias Lock (c.1710 to 65), these masterpieces of the French inspired English Rococo are also closely comparable to the pier-glasses published as plate CLXX in Chippendale's 'Director' (1763). Both glasses were severely damaged by the fire on 30th August 1989. The left hand (south) frame (NT/UPP/F/35a) had to have its bottom section cut off and recarved, and the cresting of the right hand (north) mirror (NT/UPP/F/35b) is also new. Both have been almost entirely regilded and reglazed (with replacement 19th Century glass). They may have been originally painted white or parcel gilt. (NT/UPP/F/35b is other in pair).