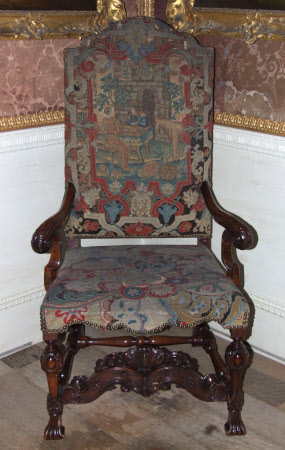 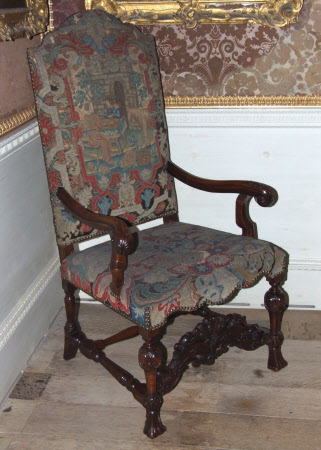 A walnut armchair, circa 1695, in the manner of Thomas Roberts, the high domed back issuing scrolled arms and carved supports, above pear-shaped legs carved with large gadroons and scrolled feet, joined to the front by an elaborately carved double-scroll fore-rail centred by a foliate cartouche and to the sides and back by turned stretchers (possible replacements), covered in gros et petit point needlework, the back depicting a lady and a gentleman, the seat with a stylised floral design. This armchair formed reputedly part of a set of eighteen chairs which were commissioned by Ford Grey, 1st Earl of Tankerville ( 1655-1701) when Uppark was just built.

By repute at Uppark from the late 17th century, in the collection of Ford, 3rd Baron Grey and 1st Earl of Tankerville (1655-1701). By descent; acquired with the house by Sir Matthew Fetherstonhaugh (1714-1774) in 1747; thence by descent; given to the National Trust in 1954 with the house and some of its contents by Admiral the Hon. Sir Herbert Meade-Fetherstonhaugh.