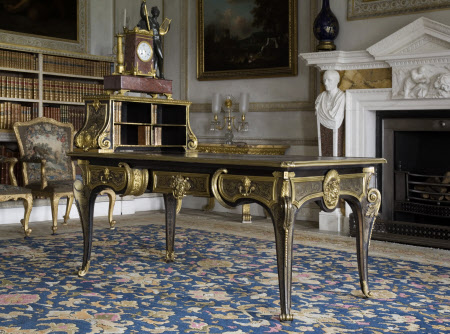 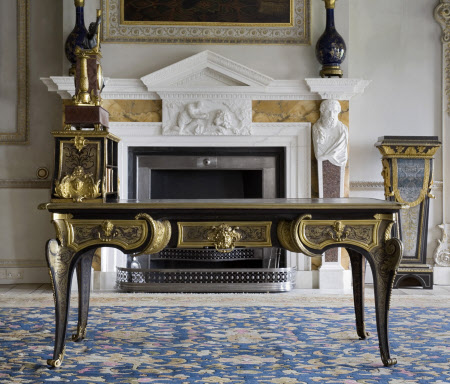 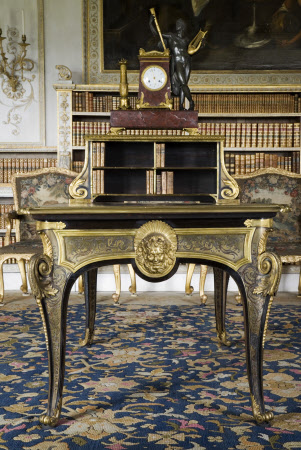 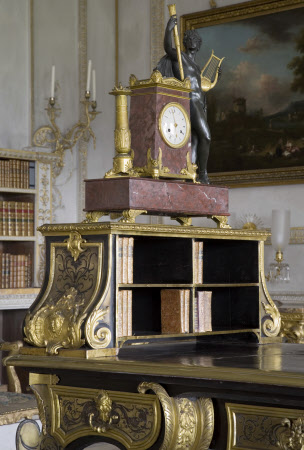 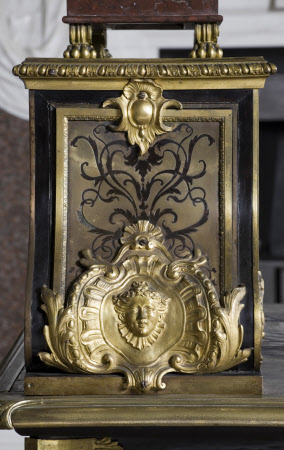 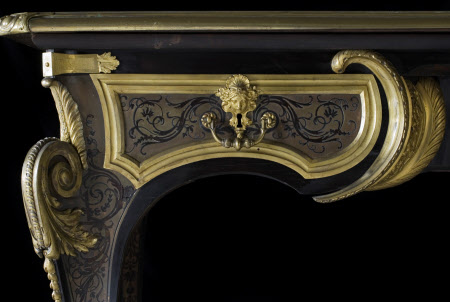 A bureau plat, French, circa 1710-1720, attributed to André-Charles Boulle (1642-1732), in oak veneered with ebony and ebonised with "contrepartie" marquetry, inlaid with typical foliate design of tortoiseshell on a brass ground, the rectangular top inset with a gilt-tooled leather writing surface above three frieze drawers to one side and three simulated drawers to the other, the central drawer mounted with a bearded mask, the side drawers with foliate escutcheons centred by female masks, flanked to each corner by a large scroll above cabriole legs on scrolling foliate feet, each side is centred by a typical bacchic mask. Revisiting the first archetype of a French writing table often described as “bureau Mazarin”, raised on eight legs joined by stretchers, André-Charles Boulle designed and produced various "bureaux plat" on six legs around 1700-1706. Therefore, "bureau plats" of the new type supported on four cabriole legs, such as the Uppark example, are generally dated no earlier than 1710. In the inventory of Boulle's workshop in 1715 no less than thirty-three “bureaux of various sizes, from six to four legs” were recorded. The design for the marquetry is comparable to the bureau “en première partie” made by Boulle in 1719 for the président de Machault (previously in collection de Voguë – illustrated in Ronfort, 2005, p.23). Indeed, the marquetry designs to the frieze drawers, the sides and the back of the legs are nearly identical although the composition on the central drawer seems cropped at the sides. The gilt bronze mounts to the frieze, drawers and sides are also identical. Nevertheless, the most closely related piece is the bureau plat kept at the château de Chantilly, dated circa 1710-1720, given to the Prince de Condé circa 1815 and inherited by the duc d’Aumale (inv. OA 358). Although it is considerably smaller its form is nearly identical, except for the narrower central drawer, the corners are also projected and mounted with a foliate scroll and a naturalistic leaf, above cabriole legs terminated by scroll feet. This Boulle desk is listed in the 1874 inventory of Uppark. In 1859 the London dealer John Webb compiled an inventory of the Sèvres vases and a few pieces amongst which “A splendid Louis XIV secrétaire in marqueterie and ormolu” identified as the present bureau plat, it was then valued at “£1500”. It is considered to be part of Sir Harry Fetherstonhaugh's collection (1754-1846). Following the Prince of Wales, Harry purchased French furniture and Sèvres porcelain in the early years of the 19th century. His first purchase is recorded in 1803, in Paris, buying on the Prince's and his own behalf from the Parisian dealer Martin-Eloi Lignereux (1751-1809).

Acquired by Sir Harry Fetherstonhaugh; listed in the 1874 inventory. By descent; given to the National Trust in 1954 with the house and some of its contents by Admiral the Hon. Sir Herbert Meade-Fetherstonhaugh.