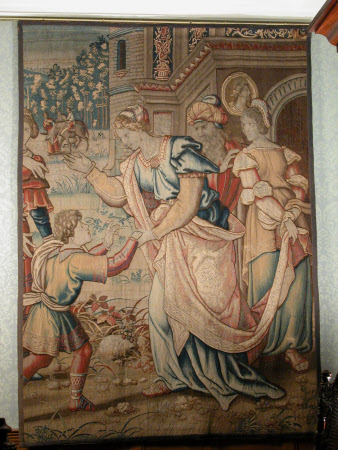 Tapestry, wool and silk, 6 warps per cm, Moses is Returned to Pharaoh's Daughter (fragment) from a set of two of the Story of Moses, Brussels, c. 1545-1560. In the centre the boy Moses rushes up to Pharaoh's daughter, who takes his hand and smiles down at him. To the right a female attendant carries the train of the princess's dress and a man in a turban watches. Part of another female figure is visible on the left, cut off by the edge of the tapestry. In the background on the right is Pharaoh's palace, an ornate building with a portrait medallion set into the wall. In the left background there is a landscape with small figures of Pharaoh's daughter and her maid leading the boy Moses who rides a mule. The tapestry has no borders and a blue edging has been applied around all four sides. In some areas the surface of the tapestry has been retouched with paint.

'Moses is Returned to Pharaoh's Daughter' is a fragment from a much larger tapestry. An example of the complete scene is in the Cathedral of La Seo in Zaragoza (Torra de Arana et al. 1985, series 16). The scene extends further on the left to include Moses's natural mother and a young man with a mule by a tree. The tapestry in Zaragoza has wide borders with playing children amongst bunches of fruit and leaves around a central palm branch. The subject of the tapestry is taken from the early life of Moses. After Pharaoh's daughter found him as a baby abandoned in the bullrushes, she entrusted him to the care of his Israelite mother telling her to nurse the child. When Moses was weaned his mother brought him to Pharaoh's daughter and he became her son (Exodus, 2). This is the scene in the tapestry, and in the background Moses is seen with his new mother, riding on a mule. The life of Moses, viewed as a major prophet in the Jewish, Christian and Muslim faiths, is told in a number of different sources. He is the subject of the Old Testament books of Exodus, Leviticus, Numbers and Deutoronomy, and further details of his life are give in Rabbinical literature, including the story of 'The Boy Moses Removing Pharaoh's Crown' at Coughton. The key events from Moses's life are also related in the Qu'ran. The two 'Story of Moses' tapestries at Coughton come from a larger series. A set of eight 'Moses' tapestries including the same designs as the two at Coughton is in the collection of the Cathedral of the Saviour, known as La Seo, Zaragoza. The eight scenes are: 1. The Finding of Moses; 2. Moses is Entrusted to his own Mother; 3. Moses is Returned to Pharaoh's Daughter (as at Coughton); 4. The Boy Moses Removes Pharaoh's Crown (as at Coughton); 5. The Boy Moses Tramples Pharaoh's Crown; 6. Moses Defending the Daughters of Jethro; 7. Moses Introduced to Jethro by one of his Daughters; 8. Moses on Mount Horeb. The two tapestries at Coughton were probably made in Brussels in the middle of the sixteenth century. They are similar in quality to the related 'Moses' set at Zaragoza, which bears the mark of the city of Brussels and the signature of an unknown weaver. The appearance on the Brussels mark allows the Zaragoza set to be dated to after 1544, when an edict dictating the use of such marks came into force. (Helen Wyld, 2011)

Purchased by the National Trust by private treaty sale in 2005.