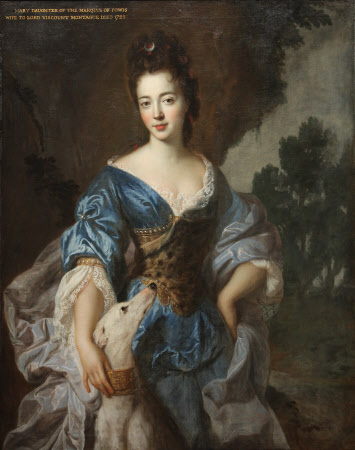 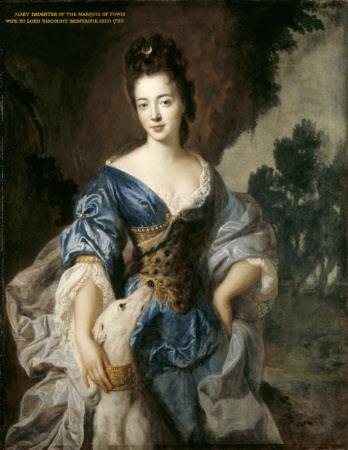 The sitter is shown as Diana, the chaste huntress goddess of the earth and the sky, identified by the crescent moon in her hair. Her right hand rests on a greyhound’s collar decorated with the arms of Herbert under a viscountess’s coronet. She was the daughter of the 1st Marquess, and titular Duke, of Powis and Lady Elizabeth Somerset. The portrait was painted in France soon after she accompanied her father into exile in 1688. Her brother, William, the 2nd Marquess/Duke, was the father of Lady Theresa Herbert, the first wife of Sir Robert Throckmorton, 4th Bt., through whom this picture came to Coughton. She was buried in the Church of the English Augustinian Nuns at Bruges. The landscape is almost certainly a later modification of an architectural background, with a decorative curtain.

Oil painting on canvas, Lady Mary Herbert, Viscountess Montagu, previously the Hon. Lady Richard Molyneux and later Lady Maxwell (1659-1744/45), as Diana by François de Troy (Toulouse 1645 - Paris 1730) (previously catalogued as in the style of Nicolas de Largilliere [Paris 1656 – Paris 1746]). She is standing, as Diana, a quarter-length length portrait, facing, in blue dress, and a gold and pearl-decorated girdle covered with leopard skin, a red ribbon and crescent moon in her hair, her right hand on the coat of arms of Herbert on the collar of a white greyhound. The sitter was the daughter of the 1st Marquess and 1st Duke of Powis, and wife of (1) Viscount Richard Molyneux; (2) the 4th Viscount Montagu (d. 1708); (3) Sir George Maxwell, 3rd Bt of Orchardtown (d. 1719/20). She retired from the world on 1738, died in 1744 and was buried at Church of English Augustin Nuns at Bruges. The portrait seems to have been painted in France soon after she accompanied her father into exile in 1688. Her brother, William, the 2nd Marquess/Duke of Powis, was the father of Lady Theresa Herbert, the first wife of Sir Robert Throckmorton, 4th Bt. It is clearly the same sitter and by the same hand as a portrait at Powis Castle, in which a slave proffers her a coronet.

By descent in the Throckmorton family, first at Weston Underwood and then at Coughton Court, until purchased by the National Trust by private treaty, 2003, with the help of an anonymous benefactor and a grant from the Art Fund.