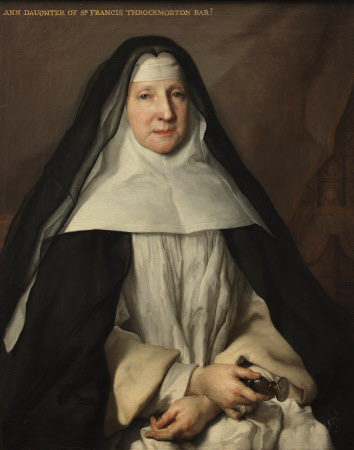 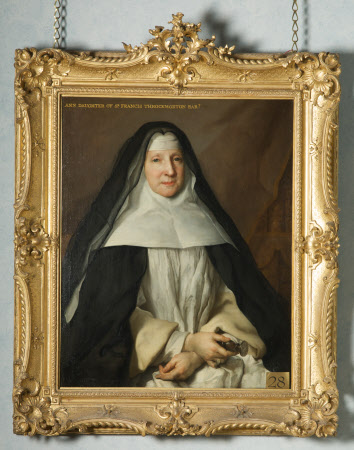 This picture is one of three of Austin nuns, all once at Coughton. They were all relatives of Sir Robert Throckmorton, 4th Bt., who evidently commissioned them from Largillière at the same time as his own (which is still at the house). Anne was the daughter of Sir Francis Throckmorton, 2nd Bt., and Anne Monson. She was a nun at Notre-Dame-de-Sion in Paris, the house of the Augustinian canonesses called the ‘Filles Anglaises’. She is shown holding a seal, which seems to denote her as Prioress.

One of four portraits commissioned by Sir Robert Throckmorton, 4th Bt (1702-1791), in 1729 from Largillière in Paris of himself (see inv. no. 135620) and three of his Augustinian canoness relations; 1749 inventory of Weston Underwood, Buckinghamshire: listed in the Parlour, as one of the pictures in “carved and guilded frames”, as “Mrs Anne Throckmorton’s [portrait]”; moved to Coughton Court by 1855, when recorded there by an inventory; included in the sale at Christie’s, 26 June 1964, lot 69: bought in at £39,000 (because the limiting sum for the whole sale set by the Trustees of the will of Sir Richard Throckmorton, 10th Bt (1839–1927) had already been reached); purchased by the National Trust by private treaty from Mrs Andrew McLaren for £350,000 in 1993 with the help of grants of £225,000 from the National Heritage Memorial Fund and of £25,000 from the Art Fund (then called National Art Collections Fund). The other two portraits are in collections in America and Australia.